TWEETS: Here's how Twitter reacted to the first half of Ireland vs Scotland

It feels just a little bit like 'too little, too late.'

Ireland dominated Italy last week, and were imperious in the very opening exchanges against Scotland this week - holding on to the ball for 89% of the first ten minutes. At one point in the half, CJ Stander alone had racked up four more carries than the entire Scotland team.

Even with a rare missed penalty, Sexton's kicks had Ireland six points up after 13 minutes and the boys in green looked imperious... But it wasn't to last. 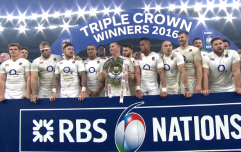 Six Nations: 5 players who stood out during match week 4

END_OF_DOCUMENT_TOKEN_TO_BE_REPLACED

Stuart Hogg burned pass the Irish from almost the halfway line and went over the line for a far-too-easy try which was converted by Greig Laidlaw.

The 9-10 scoreline in favour of Scotland was a misleading one, and this was proved on the 27 minute when CJ Stander went over the line to score Ireland's first try of the half after some momentous pressure. Sexton nailed the difficult conversion to give Ireland a 16-10 lead.

Keith Earls went on to extend Ireland's lead minutes later after Sexton caused chaos with a kick towards the Scottish tryline. Sexton missed the conversion in the end, but Ireland went in looking comfortable enough with a 21-13 lead, thanks to a Laidlaw penalty late in the half.

Here are some of the tweets that sum up the half:

#IREvSCO Genius try from Stuart Hogg regardless of what nation you follow.

popular
Prince George reportedly told classmate "my father will be King so you better watch out"
Budget 2023: Cigarettes going up, energy credits announced, child and social welfare increases confirmed
Two new 24-hour bus services are coming to Dublin
Jeffrey Dahmer’s dad thinks he knows what’s to blame for son becoming a serial killer
An underseen disaster film is among the movies on TV tonight
QUIZ: Test your knowledge with this Ultimate Friends Character Quiz
CONFIRMED: Renters to benefit from €500 tax credit as part of Budget 2023
You may also like
6 years ago
Twitter reacts to England's 21-10 win over Ireland at Twickenham
6 years ago
Six Nations: 5 players who stood out during match week 1
6 years ago
PICS: Looks like Wales were being controlled by a PS4 controller against Ireland tonight
6 years ago
VIDEO: Aer Lingus' new ad is sure to get you excited for the Six Nations
6 years ago
JOE's bluffer's guide to Ireland's 2016 Six Nations opponents
1 year ago
Four Irish players propelled into Lions debate after England hiding
Next Page