VIDEO: A few pints didn't stop this darts beginner from nailing an amazing trick shot in a Mayo pub

Christmas is not just a time for family and friends, it’s a time for darts, with the PDC World Darts Championship providing plenty of entertainment until the first weekend of the New Year.

As is the case with Wimbledon and tennis, darts coverage on TV means an increase in the amount of ordinary punters giving it a go at this time of year and we can only recommend that you don’t try and replicate what a couple of bucks got up to in a pub in Charlestown in Mayo recently. 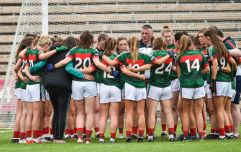 END_OF_DOCUMENT_TOKEN_TO_BE_REPLACED

After a few pints in Hayden’s Bar, local man and JOE reader Sean Mulvaney decided to test his accuracy on the dartboard; as a man that doesn’t regularly play darts he wanted to see if he was any good at it.

That’s all well and good, but to up the stakes a little, a good friend of his, Sean Quinn, spread his hand on the board and challenged the novice to hit a target between his fingers.

Brave? Yes. Silly? Absolutely. But what followed was a type of magic better than anything you’ll see from the Phil Taylors and Michael van Gerwens of this world over the next week or two.

Treble 19 on the button. Nailed it.

Cheers to Sean Mulvaney and Jack Reilly for sending this our way. If you have something you would like to share with us, send it to editorial@joe.ie or hit us up on Facebook or Twitter.

popular
New Netflix series looks like a must-watch for fans of Drive to Survive
The JOE Friday Pub Quiz: Week 279
The full list of all the new shows and movies coming to Netflix in February
Public urged to be wary of sophisticated Revolut scam in operation in Ireland
John Travolta's Irish accent has to be heard to be believed
The 50 most iconic songs of all time* have been revealed
Jenny Greene to leave RTÉ 2FM's Drive Time to host new show
You may also like
1 week ago
Shop where winning Lotto jackpot ticket was sold revealed
1 week ago
Over 90,000 dwellings in Ireland are vacant
1 week ago
Winning €19 million ticket sold in Castlebar, but the winner is still to come forward
1 week ago
Location of winning Lotto jackpot ticket worth €19.06 million confirmed
1 month ago
One man killed and four others injured following serious collision in Mayo
1 month ago
Man dies after being attacked by newly calved cow in Mayo
Next Page