WATCH: Peter O'Mahony steps up for his Lions teammates, takes on three separate Crusaders at once

Standing up for his Lions brothers.

Peter O'Mahony was as up for his first British & Irish Lions start as any many could possibly be. The Munster captain knows chances are limited to play himself into the Test team and he was on it from the first whistle.

There were trademark O'Mahony moments in a different shade of red - lineout claims and steals, forceful carries, clear-outs and one important turnover when the pressure was on. 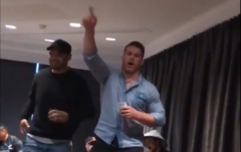 END_OF_DOCUMENT_TOKEN_TO_BE_REPLACED

The Lions scrum was having the better of it for most of a tense evening in Christchurch but, just after Stuart Hogg went off injured, the Crusaders pack put everything into a scrum and flattened their counterparts.

Just as they were starting to celebrate the moment - with Sam Whitelock pinning George Kruis to the ground - O'Mahony stepped in. He went to yank Whitelock off and then stood up to three separate Crusaders men who wanted a piece of him.

It was classic Peter O'Mahony.

If you had told him a few months ago that he would be dipping his head in to rescue an English lock in trouble, O'Mahony may well have snorted in response.

He is really buying into the Lions and the 'All for One' credo.

popular
These are the 27 new Marvel movies and shows coming in 2021 and beyond
QUIZ: Can you score top marks in this random European trivia quiz?
The hardest Line Of Duty quiz you'll ever take
The 50 most iconic songs of all time* have been revealed
Everything you need to know about the Indian variant of Covid-19: How the vaccine will affect it and its presence in Ireland
Morrissey calls The Simpsons "racist" after showing him with his "belly hanging out"
Bomb found under car of police officer as Northern Ireland unrest continues
You may also like
2 years ago
WATCH: Footage of a mongoose taking on several lions has gone viral
3 years ago
Tadhg Furlong the star of our player ratings as Lions fight back to claim draw with New Zealand
3 years ago
The best reaction to a pulsating yet anti-climactic final test as Lions draw series with New Zealand
3 years ago
Air New Zealand's attempt at an Irish accent is so, so bad, it's actually brilliant
3 years ago
Wanna go to Auckland for the Lions V New Zealand final? This is the cheapest way to get there
3 years ago
Conor Murray's god-like status is the talk of every sports reporter today
Next Page