A man by the name of John Gruber, who is a writer and podcaster, predicted that the gold version of the first Apple Watch would cost almost €8,700 ($10,000) when it would hit stores first.

He was right on the money back then and this time he is back to give his opinion about the newest iPhone and he believes that the more expensive models of the phone could cost you up on €1,300 ($1,500).

The current iPhone 7 costs about €570 for the basic model but Gruber believes that he has a fair idea what the starting price might be for the new Apple product.

It may seem like Gruber is just floating numbers off the top of his head but given his track record with guessing Apple product prices before added with the fact that he is a close friend of Phil Schiller, Apple's Marketing Senior Vice President according to the Business Inside UK, it seems like it could be a very good shout. 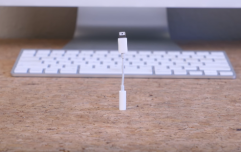 END_OF_DOCUMENT_TOKEN_TO_BE_REPLACED

Gruber states that: "When supply is constrained and demand is high, prices go higher. The higher prices alleviate demand."

He believes that Apple isn't going to shoot themselves in the foot by just releasing one new expensive iPhone and instead, are rumoured to launch two other phones at a more affordable price alongside the higher-priced iPhone.


popular
Met Éireann issues status yellow rainfall warning for nine counties
Ryanair plane in Dublin disinfected after two people fall ill on flight
In Bruges director will be making his next film in Ireland and the plot sounds great
Motorist in Kildare caught driving with tax 13 years out of date
Here are the best movies on TV tonight
QUIZ: How well do you know Will Smith's movie career?
BBC will show an 'immensely powerful' documentary about The Troubles tonight
You may also like
2 years ago
Whatsapp's latest feature allows you to organise your notifications by importance
2 years ago
There is a truly terrifying feature in the new iOS update
2 years ago
Could this be a clue that wireless charging is *finally* coming to the iPhone?
2 years ago
Apple are making it much easier for your mates to pay you back that money they owe you
2 years ago
Apple could be making the iPhone 5 obsolete according to tech experts
3 years ago
iPhone users can now send WhatsApp messages offline
Next Page