A Virgin Atlantic flight from New York to London was forced to make an emergency landing at Boston Airport after a fire broke out onboard.

It is believed that the fire was a result of a portable mobile phone charging bank overheating, which then led to a seat catching fire.

END_OF_DOCUMENT_TOKEN_TO_BE_REPLACED

No serious injuries were sustained in the incident, and all 217 passengers were safely escorted off the plane.

"Preliminary investigation suggests it is a battery pack consistent in appearance with an external phone charger," a police spokesman told reporters, according to the BBC.

In a statement, Virgin Atlantic said: "The safety and security of our customers and crew is always our top priority and we are currently investigating to fully understand the circumstances.

"We’d like to thank our customers for their patience as we work with them to provide local accommodation or to rebook alternative flights to their final destination." 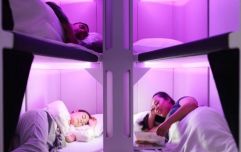 END_OF_DOCUMENT_TOKEN_TO_BE_REPLACED

Airlines do not allow power banks in the cargo luggage for the purpose of safety. Power banks are essentially batteries that use lithium cells.

Lithium batteries are more likely to combust, and are therefore prohibited for cargo transport, as part of air-transport regulations.

popular
5 years ago, Hollywood took a massive gamble on a huge sequel... and lost big time
Netflix has just added 12 very big movies to their library
One of the most underrated crime thrillers of recent years is among the movies on TV tonight
Mystery over 'dead husband' spotted in Indian restaurant has been solved
QUIZ: JOE's Big News Of The Day Quiz #40
40 years ago, a sci-fi horror with one of the best special effects of all time was released
Netflix backtracks on anti-password sharing measures following user outcry
You may also like
3 days ago
The best 3-star, 4-star and 5-star hotels in Ireland have been revealed
2 weeks ago
Travel experts reveal 2023's most underrated holiday destinations
3 weeks ago
"The best restaurant in the world" is closing down forever
2 months ago
New 'state-of-the-art' Ireland-to-Spain passenger ferry service has launched
2 months ago
Ireland named as one of the winners at world travel ceremony
3 months ago
Moving abroad this year? You might be able to claim some very handy tax back...
Next Page