It hasn’t even been announced yet, but we are still needlessly speculating.

In 2016, Nintendo released the NES Classic Edition – a lovingly-made shrunken down version of the iconic console that came pre-loaded with 30 classic games ready to play, plus the right cables to hook it up to a modern TV.

A year later, they followed it up with a SNES Classic, doing the same for their 16-bit system. 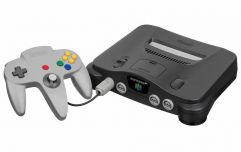 END_OF_DOCUMENT_TOKEN_TO_BE_REPLACED

And last week, Sony announced they were copying the concept, by revealing the PlayStation Classic.

So the next logical step is an N64 Classic, obviously, and a mysterious trademark filling from Nintendo has made some people think it is already on its way.

We're not ones to wait for a proper announcement before getting overly excited about things though. The NES Classic had 30 games, the SNES Classic had 20, so a 15-game N64 Classic seems like a reasonable prospect.

I’ve taken a stab at selecting 15 titles that should be on there.

Not all of these are likely due to rights reasons, and I’ve definitely left off at least one of your favourites.

But hey – that’s what the Facebook comments section is for.

Of course, Mario 64 is going to be on there. Why are we even debating this?

Normally the appeal of these Classic consoles is that they preserve the games in their original forms, as a piece of gaming history.

However, this game has now been ruined by Stormy Daniels saying that Donald Trump’s penis looked like Toad. But if Nintendo went in and removed Toad from the game, it should be okay.

Like Mario Kart, but with planes and hovercrafts and none of Trump's junk.

In truth, it is unlikely that GoldenEye would be included with any re-released console, purely for rights reasons – that 007 license doesn’t come cheap, plus developer Rare have since been acquired by Microsoft.

Then again, I’d predict there would be actual goddamn riots in the streets if Nintendo did release an N64 Classic *without* GoldenEye on it.

Perfect Dark was the spiritual sequel to GoldenEye, only with 007 replaced by original creation Joanna Dark.

A cute animal – who get this – swears... and does graphic violence and sex stuff!

It was the height of hilarity in 2001. Obviously, we’ve matured since then, but still.

The N64 couldn’t really compete with the PlayStation when it came to sports games, but the one exception was 1080 Snowboarding.

It crapped all over Cool Boarders. Plus it had the greatest menu music in the history of video games.

The Legend of Zelda: Ocarina of Time

Since the release of Breath of the Wild on the Switch, this is no longer the best Zelda game ever.

But does Breath of the Wild have an ocarina you can play actual songs on like The Simpsons theme?

Mario Party was great, but it took about four hours to play and you needed four human players, otherwise, the computer would cheat.

Still, we’d like the option to play it on Christmas Day instead of Monopoly or something.

Sure, by 2018 standards, the graphics of No Mercy make Stone Cold Steve Austin look like a surgical glove stuffed with sausage meat.

But many sports entertainment purists still maintain that it’s the best wrestling game of all time. Plus, it had the second best menu music in the history of video games.

Essentially this was just the battle mode of Pokemon Red & Blue.

It allowed you to plug Game Boy cartridge into it with a special adaptor and have them fight with flashy 3D graphics.

It wasn’t really much of a game, but a colleague of mine says he used to play it loads even though he didn’t even have a Game Boy, which in my opinion is pretty pointless and weird.

Turok was a hench-as-fuck badass time-traveller who went around fighting dinosaurs with knives and a bow and arrow.

Why he is not the most famous video game character of all time is beyond me.

The first game that ever let you make Luigi kick Pikachu in the face.

Donkey Kong 64 might have had a rap, but Banjo-Kazooie was the best non-Mario platformer on the system.

So what do you think? Are you a Blast Corps or Mario Tennis stan? Leave an angry comment and tell me why I'm wrong.

popular
QUIZ: It's time for one of our trickiest General Knowledge Quizzes yet
Landlords must give longer eviction notice periods under newly passed legislation
An underappreciated sci-fi blockbuster is among the movies on TV tonight
The JOE Movie Quiz: Week 161
Ryanair cabin crew in Spain announce 12 days of strikes in July
An Oscar-winning Dustin Hoffman drama is among the movies on TV tonight
Jordan Peterson suspended from Twitter over Elliot Page comment, says he won't apologise
You may also like
2 months ago
Reports suggest Breath Of The Wild sequel might be too big for Nintendo Switch
9 months ago
Nintendo is bringing back some classic N64 and Sega Mega Drive games
1 year ago
Super Nintendo World is officially open
2 years ago
I was a good person until I played the Untitled Goose Game
2 years ago
Nintendo announce major surprise new releases for the Switch
3 years ago
Nintendo has announced a sequel to Zelda: Breath of the Wild
Next Page