Now you can be Maverick. Or Iceman. Not Goose. Never Goose.

Every day, we inch closer towards the inevitable. Eventually, we'll all be wandering around with virtual reality headsets, flailing into the air as we escape the daily grind.

With that in mind, how do you feel about the world's first dedicated VR cinema? Paramount Pictures, alongside California-based start-up Bigscreen, are set to offer a sneak preview of this brave new world on Sunday, 3 December when Top Gun 3D transports users to the skies themselves. 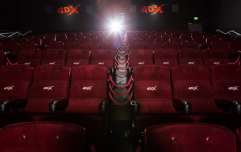 END_OF_DOCUMENT_TOKEN_TO_BE_REPLACED

As first reported by Deadline, those with any brand of VR headset can sign in to bigscreenvr.com and take their virtual cinema seat in an authentic customised theatre - complete with posters on the walls - as the testosterone-fuelled Tom Cruise classic takes flight.

Not only that, but users will find themselves sat next to a virtual audience, with the chance to chat before the movie starts.

Just don't talk during the film, eh? It might be the future, but don't be that guy.

popular
The JOE Friday Pub Quiz: Week 301
Jordan Peterson suspended from Twitter over Elliot Page comment, says he won't apologise
County where winning Lotto jackpot ticket worth over €5.5 million was sold confirmed
QUIZ: Can you name all the counties in Ireland without the letter 'A'?
Parent's Benefit Leave in Ireland is being extended from today - here's what you need to know
The 10 Best (and 5 Worst) Movies of 2022 so far
An underappreciated sci-fi blockbuster is among the movies on TV tonight
You may also like
12 hours ago
The 10 Best (and 5 Worst) Movies of 2022 so far
13 hours ago
6 must-watch movies coming to Irish cinemas in July
1 day ago
Paramount reportedly making top secret prequel to one of the greatest horror movies of all time
1 day ago
"The Raid meets Tangled" plus 4 more movies & shows to watch this weekend
2 days ago
007 producers provide new update on Bond 26
2 days ago
The main reason why that fourth Christopher Nolan Batman movie will never happen
Next Page