Video: You can buy the hoverboard from Back To The Future

That's right, if you have the requisite cash you can pick yourself up a real hoverboard...sort of

Now, we all know that there is no way you could have a hoverboard (yet... lazy scientists), but an electric skateboard from the lads at Z-Board will certainly fill the void for now, in particular if it's modelled exactly like the iconic pink board from Back to the Future II.

The video is the lads at Z-Board's pitch to get their indiegogo project off the ground (which you can contribute to over here) and they need $5000 to get the whole thing going. They have a full range of other electric boards on their website if they tickle your fancy too. 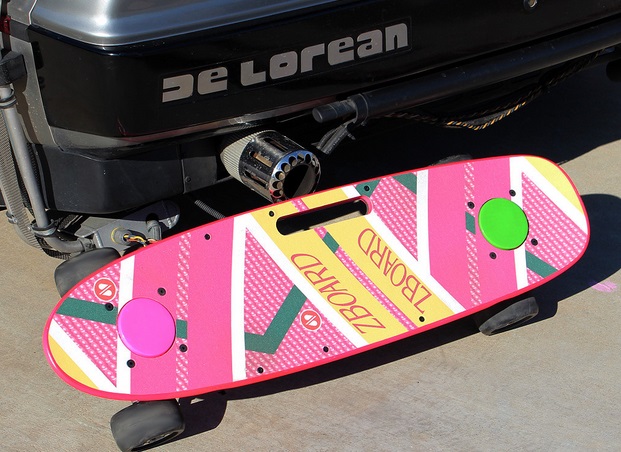 If you want to get your hands on one that will make you feel like you are travelling back to the future, it will set you back $1500 (around €1100), but if you're not quite that flush, $200 (€145) will get you a version of the board without the electrics. The money raised will go to the Michael J. Fox Foundation for Parkinson's Research to help them continue their work. Get your order in quickly though as there are only 25 BTTF boards being made.

END_OF_DOCUMENT_TOKEN_TO_BE_REPLACED

We recommend that you don't try to skate this over water either, it didn't work out well for Marty in the movie, and it probably wouldn't go too well on this model. Before you ask, no, we don't know where to get the jacket, hat or shoes in the video.

Hat-tip to SuperCompressor.com for the video


popular
Study shows it takes men four months of dating before they’re happy to share food with their partner
Met Éireann issues status yellow rainfall warning for four counties
Tayto have launched two brand new crisp flavours for you to get stuck into
Gardaí launch investigation into four-lane motorway sulky race
It's Week 20 of JOE's 19 in 90 quickfire quiz
Here are all the best new titles coming to Netflix in March
The story behind Netflix's latest true crime documentary is absolutely off-the-wall bonkers
You may also like
20 hours ago
Michael Palin to feature in a David Attenborough documentary coming to Irish cinemas
1 day ago
Ben Affleck reveals he quit Batman role over fears he'd "drink himself to death"
1 day ago
Here are the best movies on TV tonight
1 day ago
In Bruges director will be making his next film in Ireland and the plot sounds great
3 days ago
QUIZ: How well do you know The Wedding Singer?
3 days ago
THE JOE Movie Quiz: Week 41
Next Page