10 reasons why Zlatan Ibrahimovic could be the coolest footballer alive

JOE has recently brought you some of the reasons why we think the supremely talented and bearded duo of Xabi Alonso and Andrea Pirlo could be the coolest footballers alive, but one man could challenge them.

Ladies and gentlemen, may we present to you the one and only... Zlatan Ibrahimovic.

His latest compilation is quite special.

But this one against England deserves its own special mention...

...it's still not our favourite Zlatan goal though. This is.

2) He really is a sound bloke

Take a look at Zlatan giving this young pitch invader a hug and his jersey.

This nice gesture is nothing in comparison to what he did for the Swedish learning disability team though.

After finding out that the team's participation in the World Cup was in jeopardy, due to a lack of finances, the kind hearted striker gave 350,000 Swedish Krona (40,000 euros) of his own money to help pay for flights, hotels and living expenses. Gent.

3) His assists are special also

4) These genius quotes from his book

On Pep Guardiola -“Then Guardiola started his philosopher thing. I was barely listening. Why would I? It was advanced bullshit about blood, sweat and tears, that kind of stuff.”

On Jose Mourinho - "Mourinho is a big star…He’s cool. The first time he met [my wife] he whispered to her: ‘Helena, you have only one mission. Feed Zlatan, let him sleep, keep him happy!’ The guy says what he wants. I like him.”

On Mario Balotelli - “I like fireworks too, but I set them off in gardens or kebab stands. I never set fire to my own house.”

His book is a great read, although most chapters essentially end with "We had an argument/problem and I was right and or saved the day."

5) His temper seems to have chilled

He had controversies in the past, like his runs-in with former teammates Rafael Van der Vaart and Oguchi Onyewu, but he seems to have mellowed with age.

This gesture to an opposing 'keeper after he made a howler is a really nice touch.

He also gave his P.S.G teammates brand new Xbox Ones after he was made the console's ambassador.

We're certain Van der Vaart wouldn't have got one though.

6) He is mates with some really cool people. Here he is...

Having the craic with Jurgen Klopp.

Getting bromantic with Jose Mourinho.

Giving Novak Djokovic a run for his money.

Having some Italian chats with the lovely Manuella Spinelli. 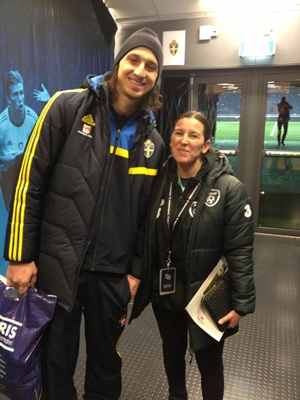 7) It's not arrogant if you can back it up

This is one of the greatest interviews ever.

On missing World Cup 2014 "One thing is for sure, a World Cup without me is nothing to watch so it is not worthwhile to wait for the World Cup.”

After being asked who will win Euro 2012 straight after Sweden were knocked out. "I don't give a shit who wins Euro 2012, I'm going on a holiday."

Happy birthday @Cristiano. I have sent your new favourite outfit in the post #DareToZlatan pic.twitter.com/HWNKdq46J5

The striker is fluent in five languages (Swedish, Bosnian, English, Spanish, Italian) and some of his quotes down the years are absolutely priceless.

On his trial at Arsenal, “Arsene Wenger asked me to have a trial with Arsenal when I was 17. I turned it down. Zlatan doesn’t do auditions.”

On John Carew, “What Carew does with a football, I can do with an orange.”

When asked what he got his wife for her birthday, ”Nothing, she already has Zlatan.”

On himself, “An injured Zlatan is a pretty serious thing for any team."

popular
Here's how to make €9-11 on Revolut in just a few minutes
Green Party representative calls for a temporary ban of stag and hen parties in Ireland
Pop Idol star Darius Campbell Danesh has died, aged 41
Off-duty Garda arrested in Tipperary on suspicion of drink driving
Murder investigation launched following death of 75-year-old woman in Kerry
An stress-inducing music drama is among the movies on TV tonight
QUIZ: You won't be able to correctly guess the meaning of all these words
You may also like
2 years ago
In an uncertain world, David Luiz provides the reassurance we all need
2 years ago
Arsenal manager Mikel Arteta tests positive for Covid-19
3 years ago
Arsenal ambassador and Bollywood actress apologises for racist remarks made towards Alex Iwobi
3 years ago
The Football Spin featuring Mourinho’s resilience, Liverpool’s desperate chase and the Ada Hegerberg effect
3 years ago
WATCH: Matteo Guendouzi celebrates with Arsenal fans after North London derby win
3 years ago
Arsene Wenger has finally explained the infamous trouble he has with zips
Next Page