Cork topple the Cats as Shefflin sees red in Thurles

Jimmy Barry-Murphy’s side, the outsiders for Liam McCarthy according to the bookies before the game, now march onto an All-Ireland semi-final date with Dublin.

The reigning All-Ireland champions were dethroned and make an unusual July exit in the championship with a young Cork outfit showing greater hunger and teamwork on the day in front of a raucous support at Semple Stadium.

The Rebels made a great start to the game, though the dismissal of Henry Shefflin helped the men in red to a 0-11 to 0-06 lead at the interval.

The Ballyhale Shamrocks man was sent-off by referee Barry Kelly after two bookable offences, the second of which was for a high tackle on Jamie Coughlan. 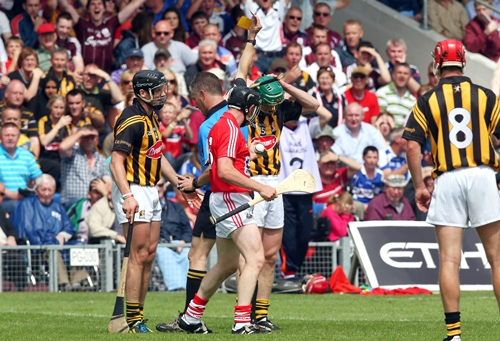 In the second half an inspired Cork outfit continued the same vein of form to win on a scoreline of 0-19 to 0-14, with Pat Horgan leading leading marksman, though it was ultimately a team performance that won out on the day.

Kilkenny yet again demonstrated that never-say-die attitude that has been the hallmark of this great side for so many years, but ultimately fell short and could not manage a fourth championship success over the Rebels, which would have been a first.

A great victory for Cork which will stand them in good stead and we just hope that the red card wasn’t the last act we see of Shefflin in a Kilkenny jersey.

popular
Harvard study reveals how many times men should ejaculate each month to stay healthy
Parents left in shock after gorillas start mating in front of kids at zoo
Colin Farrell shouldn't win the Oscar this year
Conor Mcgregor hit by car ‘at full speed’ while cycling
The JOE Friday Pub Quiz: Week 331
Close call as Paul McCartney tries to pose on Abbey Road crossing
Man wins $1m on lottery ticket after someone pushed in ahead of him in queue
You may also like
6 days ago
Elderly man killed in Cork hospital attack named
1 week ago
Patient in his 80s killed on Cork hospital ward following horrific attack
2 weeks ago
Investigation launched after body discovered on a path in Cork
4 weeks ago
Man dies in unexplained circumstances in Cork
2 months ago
Garda in critical condition following road crash in Cork
3 months ago
Buying a home in Cork, Kerry, Limerick, Clare, Tipperary or Waterford? Our FREE virtual mortgage event is here to help...
Next Page