Romelu Lukaku may be feeling a little low after his saved spot kick handed Bayern Munich victory in Friday night’s Super Cup, but he has received support from his former teammate.

The Belgian international saw his effort saved by Manuel Neuer in a cracking contest that looked like going Chelsea’s way until a dramatic late goal forced extra time and subsequent shoot-out.

Lukaku was the fall guy, but Didier Drogba was quick to offer his support to the Belgian international on Instagram.

Drogba scored the winning penalty against Bayern in 2012 and hopes that the striker will learn from his mistake, just as he did after a red card against Man Utd in Moscow in 2008. 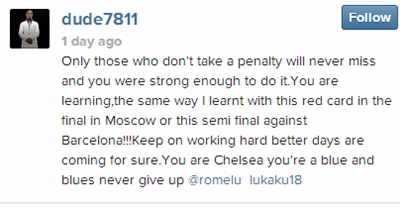 popular
The six Eurovision countries with "irregular voting patterns" have been revealed
Eurovision producers reveal "irregular voting patterns" during Saturday night's final
QUIZ: Try out one of our trickiest General Knowledge Quizzes yet
Where will 2023's Eurovision be held if Ukraine can't host?
QUIZ: Can you name all the countries beginning with 'A'?
Warmest day of the year leads to – you guessed it – a week of rain
One of Liam Neeson's best ever performances is among the movies on TV tonight
You may also like
1 month ago
Roman Abramovich 'suffered suspected poisoning' following Russia-Ukraine peace talks
2 years ago
Here's how to get tickets to Coca-Cola's last Premier League roadshow
2 years ago
"Are you talking about a man who took a 6th place Derby from the Championship, to 6th place in the Championship?"
3 years ago
QUIZ: Name these former Liverpool and Chelsea players
3 years ago
The Football Spin on Maurizio Sarri's problems and have Chelsea handed Manchester City the title?
3 years ago
The Football Spin on the Rafa Benitez conundrum, Chelsea's chance for glory and how English football anticipated Brexit
Next Page