Gallery: Look great on the green with these tee-rific bits of golfing gear

Golfing season is just about to get into full swing, so make sure you look the part on the fairways.

For the enthusiasts out there, golf is a year-round sport but for the fair-weather fairway plodders amongst us, golfing season normally starts around the time of the Masters and, this year at least, will wind down shortly after Paul McGinley hopefully leads Europe to victory over the US at Gleneagles later in the year.

If you’re not a regular and if your handicap is closer to 50 than five, you can at least try and convince onlookers that you belong and that you would have been the next Tiger Woods had an unfortunate elbow injury not railroaded your ambitions just as your career was about to take off.

The first step to doing that is by making yourself look that you play golf on a regular basis and you can do just that without burning a hole in your pocket thanks to the folks at Littlewoods Ireland.

Starting from the top down, an absolutely necessary part of a golfer’s get-up is a traditional baseball cap, which will keep the sun out of your eyes and also ensure that you have a ridiculous tan line shortly above your eye-brows on particularly warm days, ain’t that right Stewart Cink? 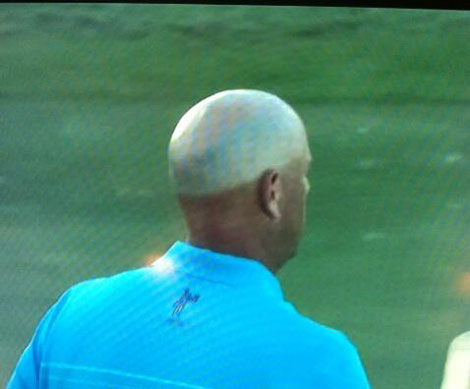 Like most aspects of playing golf, there’s no point over-complicating things so we suggest going with this simple Nike Tech Swoosh Cap for just under €20.

Assuming that the weather’s going to be warm at some point over the next few months, you’re going to want a nice, light polo-shirt to throw on that’s comfortable but still fashionable, two boxes which are ticked by the range of Lacoste polo shirts available online at Littlewoods.

Unfortunately, as we know too well, the weather’s not always warm around these parts; actually it would be more accurate to say that it’s rarely warm at all and that we should be prepared for more inclement conditions.

Don’t worry, you can keep all of that nice gear and those nice clubs bone dry (well, the gear at least) with a sturdy umbrella, which is exactly what you’ll get with the TaylorMade RBZ Stage 2 Umbrella and you’ll still have change from €50.

Another essential piece of kit for out on the course is a golfing glove to improve one’s grip of the club, a glove which could make the difference between you sending your drive 250 yards down the fairway in front of a gallery at the first tee, or sending your club flying 50 yards while your tee shot trickles embarrassingly off the tee and rolls a couple of inches away. You can’t go wrong with the Adidas Inertia Golf Glove for €12.

Last but not least, in fact, arguably the most important item of all is a nice pair of golf shoes and while they’ll certainly look great, if you don’t think they’ll make a difference, try maintaining the ideal position while swinging at the ball on a wet day and you’ll see what we mean.

We like the look of the Nike FI Impact Golf Shoes and we’re sure once you try them on, you will too.

Open gallery
popular
Met Éireann issues Status Yellow thunderstorm warning for 12 counties and 2 provinces
Meet the Irish man who’s selling all of his stuff and going to live in a tiny house on wheels
The JOE Movie Quiz: Week 102
QUIZ: Is your General Knowledge up to scratch?
The JOE Music Quiz: Week 57
QUIZ: How many of these characters from The Simpsons can you name?
The JOE Friday Pub Quiz: Week 243
You may also like
2 months ago
Fine Gael senator says golf and sea-swimming restrictions should be lifted
1 year ago
"Very chaotic" - Irishman describes being struck by lightning on US golf course
1 year ago
Irishman hospitalised after lightning strike on US golf course
1 year ago
Shane Lowry given a hero's welcome in his hometown of Clara, Co. Offaly
1 year ago
Gardaí release plan for Shane Lowry homecoming in Offaly this evening
1 year ago
WATCH: RTÉ's interview with Shane Lowry's granny is absolutely wonderful
Next Page
Uncategorized | 7 years ago
7
shares