Arsenal appear to be struggling to offload their striker Nicklas Bendtner, but the Dane is now available on eBay for any prospective buyers.

Of course we appreciate this is just a piss-take, as are most things related to the Danish international – just think of the Bendtner drink-driving toy set – but the going rate appears to be just £2.5 million for “one of the greatest striker to ever grace the beautiful game”.

Eintracht Frankfurt were believed to be close to signing the frontman, and five other clubs were rumoured to be interested, but his refusal to accept a wage cut appears to be an issue.

We are surprised more clubs aren’t willing to stump up for his services. After all, as the ad says, he does guarantee at least five goals a season. 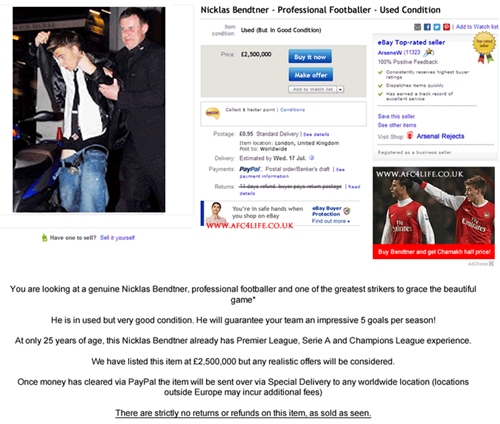 And it also states any realistic offers will be accepted, so he could well be a bargain buy for someone.

The Big Reviewski || JOE · The Big Reviewski with Dune, a mini-Hangover reunion & the best of Timothée Chalamet
popular
Alec Baldwin fatally shoots woman with prop gun on movie set
Christy Moore has announced 10 nights at Vicar Street starting next month
HBO announces a new Sopranos series is in the works... kind of
Dublin museum voted Europe’s leading visitor experience... again
QUIZ: Can you name all the countries beginning with L?
CONFIRMED: Nightclubs to open at 100% capacity, 11.30pm curfew has been removed
Here's the lineup for this week's Late Late Show
You may also like
1 year ago
In an uncertain world, David Luiz provides the reassurance we all need
1 year ago
Arsenal manager Mikel Arteta tests positive for Covid-19
2 years ago
Arsenal ambassador and Bollywood actress apologises for racist remarks made towards Alex Iwobi
2 years ago
The Football Spin featuring Mourinho’s resilience, Liverpool’s desperate chase and the Ada Hegerberg effect
2 years ago
WATCH: Matteo Guendouzi celebrates with Arsenal fans after North London derby win
2 years ago
Arsene Wenger has finally explained the infamous trouble he has with zips
Next Page