Oh Twitter. You amuse us so. Although sometimes, if we’re being a little honest, we worry about your level of intelligence. In fact, this latest incident has just proved that you’re a bit dumb. Actually you’re dumber than a bucket of hair…

Case in point? Can we all just take a minute to reflect on that awkward moment when Twitter realised that the sinking of the Titanic was an actual historical event and not just a film?

Hysteria was widespread over the Twitter during the past two days when various people around the globe had an epiphany. What was that epiphany you ask? Well they had the bright idea to do a bit of research and surely enough they found out that the Titanic disaster happened. And it was real. And then they took to Twitter to share this knowledge with us all. The only problem? Eh…they’re about 100 years late… 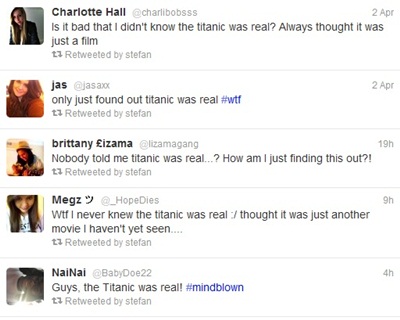 Honestly? It’s actually a bit mind-boggling that these people somehow never heard about one of the most infamous disasters in history. A more disturbing thought, however, is the fact that the majority of these people probably went to the cinema to see Titanic without realising that it was a true story (or knowing what happened at the end...)

We can just imagine them sitting in the dark and screaming “Hey, watch out for that iceberg!!!” at the screen.

Anyway, despite the fact that there’s been constant media coverage about the upcoming anniversary on April 12, this just goes to show that there are a lot of people out there who need to learn what Google is and how they can use it to find out about important world events as they happen, not a century afterwards.

So, just to clarify in case you’re a little bit confused: the Titanic happened and, more importantly, Leonardo di Caprio and Kate Winslet had nothing to do with it.

popular
One of the best action movies of recent years is finally available to watch at home
The JOE Movie Quiz: Week 138
QUIZ: Give this General Knowledge Quiz a whirl
Irish employers urged to "take time" when lifting workplace restrictions
QUIZ: Can you name every Batman actor in three minutes?
The JOE Friday Pub Quiz: Week 278
Lisa Fallon praised as she opens up about terrifying ordeal on Late Late
You may also like
5 years ago
WATCH: This video showing 'hand-rolled ice cream' in Dublin is mesmerising
5 years ago
There's a new app that helps people find any food, drink or product they're looking for, locally
5 years ago
5 reasons why your business should 'pop-up' at one of Dublin's busiest stations
5 years ago
JOE BUSINESS: 3 great reasons you should pop-up in Dun Laoghaire this summer
5 years ago
This new app will help you keep track of the Luas strikes
5 years ago
TWEETS: Mixed reaction as Joan Burton steps down as leader of the Labour party
Next Page