A lot of us bring our camera phones to sporting events to get some great pictures, but this one is going to take a lot of beating

During the last game of the College World Series in Nebraska, three girls ran on the field and caused a bit of a scene, but they weren't streaking lads, get your minds out of the gutter.

Instead, they just felt like running on and getting a few pictures of their moment of fame, and this girl managed to snap a pretty fantastic picture as she was tackled by security. 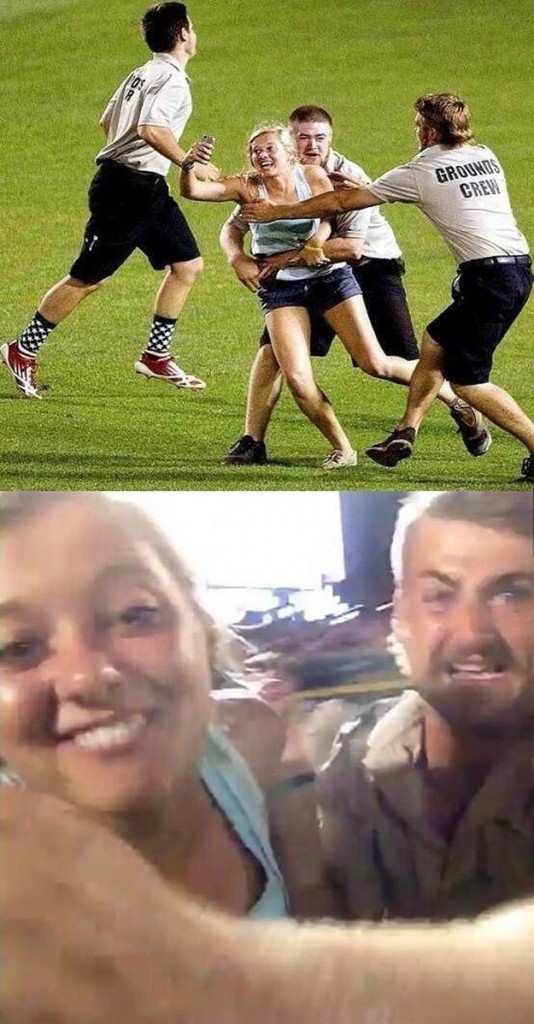 The girls were escorted from the stadium, and it looks like they'll be hit with a $1500 fine for their trouble. We're sure a few people will chip in to help, given how brilliant this shot is though.

Hat-tip to Martin Rosney on Twitter for the pic

popular
The JOE Friday Pub Quiz: Week 220
The JOE Movie Quiz: Week 80
Harry Styles hits back at critics who told him to be more 'manly'
The JOE Music Quiz: Week 36
Here's Week 58 of JOE's 19 in 90 quickfire quiz
The 50 most iconic songs of all time* have been revealed
Here are the 6 best movies on TV tonight
You may also like
10 months ago
Ranking the 10 most passive-aggressive ways to end a text conversation
1 year ago
25 of the funniest tweets you might have missed in October
1 year ago
WATCH: RTÉ raised their game with their Halloween reporting on Thursday
1 year ago
PIC: Man discovers 1998 Spanish article naming part of Cork the most sexually repressed place in the world
1 year ago
Personality Test: What percent clown are you?
1 year ago
WATCH: The trailer for Season 14 of It's Always Sunny features melons, poison and laser tag
Next Page