Picture: Roy Hodgson was a much better footballer than we thought according to Match of the Day

This is a record that we didn't know Roy held, we must admit

While we won't claim that we're the statisticians in charge of Opta, nor the type of lads who compile data on how many passes Xavi completes that go off at an angle of 60° or more, but we would like to think that we know the odd stat or two about football.

For instance, we thought we knew who the all-time leading Premier League goalscorer was, but it turns out we were completely wrong, at least according to Match of the Day last night. 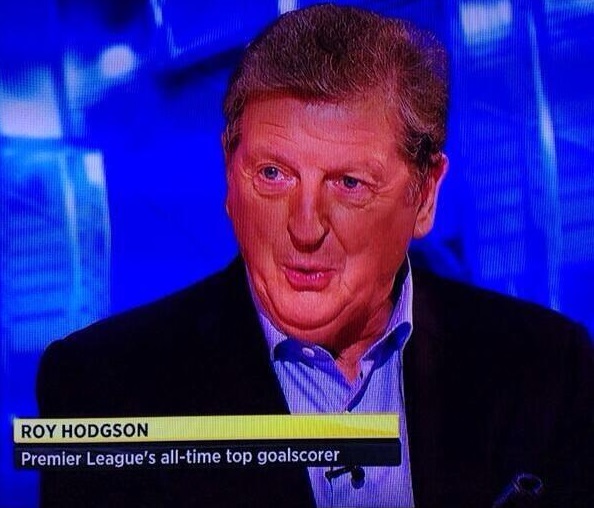 For a man with such a fantastic record up front, his England team aren't half struggling for goals at the minute.

Hat-tip to Anto Hughes, Aidan Tuffy, Gary Sheehan, Paul, and any of the others on Twitter who sent this our way, and to FA.com for the picture

popular
QUIZ: Can you get top marks in this short but tricky Irish geography quiz?
4-year-old girl killed in Sligo caravan park named as Alice Dunleavy
Two long-thought-dead Marvel projects appear to be in the works
Family of Ashling Murphy share heartbreaking tribute at Fleadh Cheoil
QUIZ: Can you name all the counties in Ireland with an ‘N’ in their name?
QUIZ: Can you score 12/15 in this difficult General Knowledge Quiz?
The JOE Friday Pub Quiz: Week 306
You may also like
2 years ago
Match of the Day to return to BBC this weekend
3 years ago
Gary Lineker calls Saturday’s Match of the Day ‘the most difficult he’s ever hosted’
4 years ago
Here's what is on Match Of The Day tonight, in case you missed THAT save
4 years ago
Crowd's hostile reaction to James McClean's tackle is unacceptable in this day and age
4 years ago
People loved Gary Lineker's tribute to Bruce Forsyth on Match of the Day
5 years ago
David Moyes apologises to Match of the Day reporter for 'slap' threat
Next Page