Rome wasn’t built in a day, but it didn’t exactly fall in 90 minutes as had been predicted.

The MLS tried their best to ratchet up a pre-season friendly between their All-Stars and Roma last night, but even their psychological warfare wasn’t enough in the end.

With the MLS season in full-swing, the players would have fancied their chances of the scalp of the Serie A side and the team included a certain Thierry Henry. Indeed they beat Chelsea 3-2 last year, but conceded as early as the fourth minute, with an injury-time consolation putting a gloss on a 3-1 defeat. Though the PR work beforehand was all about the win.

Last year they led with a campaign of “Let’s kick them in the crown jewels” prior to entertaining the men from Stamford Bridge and this year they continued in a similar vein when they chose to go with this poster, showing both an extensive historical knowledge as well as a penchant for a bit of sledging. 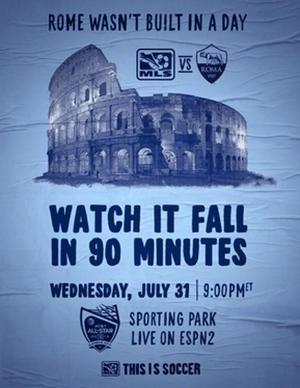 Francesco Totti by all accounts was not impressed when he saw the poster in their changing room, while a promotional video was also released in which several of the MLS players, including Montreal's former Italian international Marco Di Vaio, learned to say phrases in Italian. Like ‘Welcome to the Blue Hell,’ ‘You know the ref is American’ and ‘Yellow and red don't go well together.’

It was hardly the type of stuff to have the Italians quaking in their boots, but you can’t fault them for trying.

Totti though had the last laugh and can now add the prestigious piece of silverware to his glittering list of achievements. 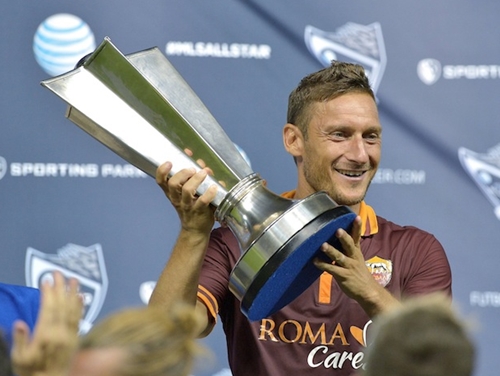 The Big Reviewski || JOE · The Big Reviewski with Y: The Last Man, that Malignant ending & a secret streaming service
popular
Aer Lingus announces flight sale as US to lift travel ban for vaccinated EU passengers
Cork City Centre described as a "no go area" after man pulled from wheelchair in violent attack
The Big Reviewski JOE Movie Quiz: Week 120
Green Party Councillor calls for smoking ban in outdoor dining areas
The weather for the week ahead looks very autumnal indeed
"Vile" and "homophobic" protest outside Leo Varadkar's home condemned by TDs
The 50 most iconic songs of all time* have been revealed
You may also like
3 years ago
WATCH: Thierry Henry has a breakdown over the word "percentages" on Sky Sports
4 years ago
It's happened again! Carragher and Henry's hilarious bromance continues on strong
5 years ago
VIDEO: Watching Thierry Henry kick footballs at James Corden on live TV is a lot of fun
5 years ago
VINE: Thierry Henry's face after Gareth Barry was mentioned as an England great is priceless
5 years ago
VIDEO: Carragher and Henry picked a very interesting Team of the Season so far on MNF
6 years ago
Video: The new Sky Sports Premier League ad with Thierry Henry is bloody fantastic
Next Page