Fans in Lisbon had to wait for a few days to see one of the season's biggest derby games as Benfica took on Sporting last night, which had been moved from the weekend due to bad weather and high winds causing damage to the stadium. The 60,000 fans had already piled in to the ground and were no doubt disappointed to be headed home without having seen a minute of football. 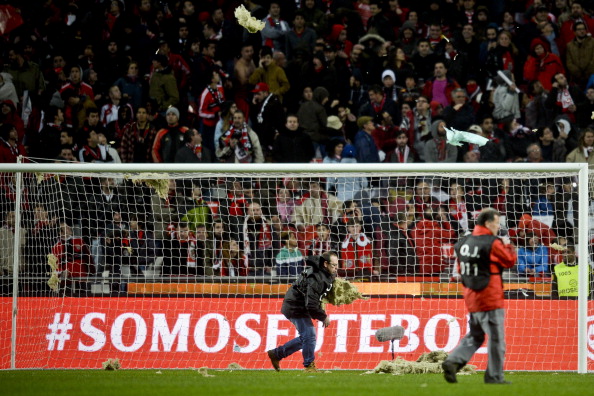 However, although they had to wait until last night, Argentine Enzo Perez scored a pretty brilliant goal which would have been worthy of winning most matches, and proved good enough to give his side an insurmountable lead in this game.

He cut across the box, faked to shoot causing his defender to take a seat on the ground giving him a much better view and then fired one in to the far corner past a helpless goalkeeper.

The win pulls Benfica four points clear at the top with Sporting falling back to third, and although things at the Christmas break were very tight with both teams from Lisbon and Porto all tied for points at the summit, the Eagles are beginning to soar away from the competition after what was a pretty one-sided game.

popular
Amazon Prime Video has just added 38 very big movies to its library
The Banshees Of Inisherin is arriving on Disney+ sooner than you might expect
U2 drummer Larry Mullen Jr. says band may perform without him in 2023
The 50 most iconic songs of all time* have been revealed
Mia Khalifa claims seaside town is better than Miami
Dissection of a woman's body to be shown on Channel 4 tonight in TV first
These are the 10 funniest jokes according to research
You may also like
3 days ago
The JOE Friday Pub Quiz: Week 323
5 days ago
Cristiano Ronaldo 'agrees £173m-a-year deal' with Saudi club
1 week ago
Miss Croatia slammed for raunchy World Cup videos that ‘disrespect Qatar’
1 week ago
Japan fans explain why they clean up after World Cup matches
1 week ago
The JOE Friday Pub Quiz: Week 322
1 week ago
Japan supporters clean up rubbish following famous win over Germany
Next Page