Brought to you by The National Lottery

The last stop on our Ice Bath Quiz tour was definitely worth waiting for!

After visiting rugby clubs in Leinster, Munster and Connacht, our Ice Bath Quiz tour with The National Lottery took us to County Cavan. While it may be the fourth time, watching the players hop into a bathtub filled with icy water hasn't stopped sending a shiver down our spine.

In case we haven't communicated it enough, it's a very cold bathtub.

Each club taking part chose one representative to hop into the tub and answer as many questions as possible in 60 seconds. Given the fact Irish rugby legends Jenny Murphy and Gordon D'Arcy were the ones asking said questions, it's definitely not an easy challenge!

Just like hundreds of other clubs up and down the country, Cavan RFC has benefited from The National Lottery's Good Causes funding. Since 2017 the club has received over €21,000, and all of that has gone into keeping the club, and its facilities, in ship shape.

With one correct answer meaning one point, here's how the scores have gone for the other clubs:

Watch the video below to see if Cavan has what it takes to come out on top! 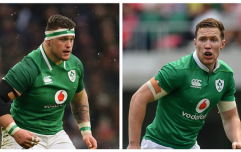 END_OF_DOCUMENT_TOKEN_TO_BE_REPLACED

All games are strictly for those aged 18 or older. Play responsibly, play for fun.

Brought to you by The National Lottery


popular
The JOE Friday Pub Quiz: Week 174
Paddy Holohan has been suspended from Sinn Féin over his claims that "scum" underage girls were having sex with men and blackmailing them
Paddy Holohan has been suspended from Sinn Féin with immediate effect
QUIZ: How many of these Disney Channel TV shows can you name?
Leo Varadkar hurries away from questions about "corporations and parasite landlords" on campaign trail
Hank Azaria will no longer voice Apu on The Simpsons
Netflix's new crime thriller The Stranger looks excellent
You may also like
1 month ago
Rory Best encourages public to get nominating for Grandparent of the Year
2 months ago
SportsJOE presents The Great Debate
2 months ago
The perfect night out for rugby fans looking to get over that World Cup heartache
3 months ago
Omniplex cinemas around Ireland to screen Ireland v New Zealand live
3 months ago
WATCH: Players from Loughrea RFC have a go at the Ice Bath Quiz
3 months ago
WATCH: Balbriggan RFC players take the Ice Bath Quiz
Next Page