The Rock's portable gym looks like the ultimate place to train

He calls it the 'Iron Paradise' for a reason...

Most of us harbour visions of turning our homes into the ultimate personal workout space, and it's fair to say The Rock has fulfilled his dream.

The former WWE Champion-turned-actor has recently been posting a high volume of footage from his portable gym, and it looks ridiculously well-equipped.

Most commercial gyms aren't even kitted out as well as this, so here is a window into The Rock's space. 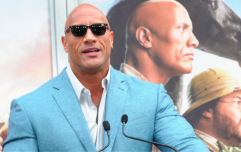 END_OF_DOCUMENT_TOKEN_TO_BE_REPLACED

In most homes, you can just about fit a pull-up bar. The Rock's place has a full pull-up station attached to a cable crossover, however.

Most pull-up bars built for home use will just about take your body weight - but The Rock's will allow him to add weight to pull-ups, too.

The weighted pull-up is one of the best exercises for developing the back, biceps and forearms.

Be careful you're not trying to pin your personal pull-up bar up onto plasterboard, as numerous gym fail videos unfortunately feature.

This is a flywheel squat machine. The best gym in your city probably doesn't even have one. It allows the user to feel the force of a barbell squat without a barbell or any upper body load.

If you've got lower back problems or are just looking to take your training up a notch, this machine can be useful for stimulating the quads, hamstrings and glutes.

It has even been used in recent research. One study looked at the number of workouts you need to first notice muscle gains.

Researchers found evidence of new growth after just five workouts on a target muscle group. The machine they used for this study was the flywheel squat.

Who in the blue hell is going to argue with The Rock's leg day?

The People's Champ has been using this to recover from numerous injuries, following the advice of strength coach Dave Rienzi.

The glute thrust is still a great exercise for building bigger and stronger glutes, even if you don't have injuries. When you sit down for long periods, such as with a desk job, your glutes tend to switch off and so activating them with this style of training is advised.

Including a dip station in your home gym is trickier than a pull-up bar. Normally, the closest option involves using the tops of chairs, but that poses its own risks.

Not only could you fall and injure yourself, but the chairs could break too. You want to have somewhere to sit to eat your Sunday lunch, remember.

Only one other person has trained with The Rock in the portable gym - star of The US Office John Krasinski. Krasinski's comments were a ringing endorsement for the Iron Paradise.

My good bud and the only human I’ve allowed in my traveling gym @johnkrasinski describes it..
“looks like spaceships has landed” 😂👽💀 #EnterAtYourOwnRiskBuddy https://t.co/kzECClmExw

popular
Patient arrested after switching off roommate's ventilator because it annoyed her
Winter warning issued as "severe" week of cold weather in store for Ireland
Peter Kay moved to tears on stage while opening his first stand-up tour in 12 years
Dancing with the Stars has added a very surprising contestant
Simon Cowell concerns fans with appearance as they 'don't recognise him'
20 years ago, one of the best sci-fi movies of the 21st century was a box-office bomb
Ireland sees '100% success rating' with four-day work week trial
You may also like
2 weeks ago
QUIZ: JOE's Big News Of The Day Quiz #12
3 weeks ago
15 years ago, the director of Donnie Darko destroyed his own career
1 month ago
WATCH: The Rock teases that Barry Keoghan will play the Joker in Black Adam sequel
3 months ago
A charming wrestling comedy – yes, they exist – is among the movies on TV tonight
9 months ago
Dave Grohl tells incredible story of Foo Fighters' biblical 2015 Slane gig
11 months ago
The Rock has a very blunt response to Vin Diesel's invitation to return for Fast 10
Next Page