The new Batman game finally has an official release date

Unlike a lot of other upcoming big games, it thankfully hasn't been pushed back to 2023!

Following the massive successes of Batman: Arkham Asylum and Batman: Arkham City, we haven't been able to play within the world of that version of Gotham since 2015's Batman: Arkham Knight, all of which were developed by Rocksteady Studios.

In between there, we did get Batman: Arkham Origins, and the makers of that game - WB Montreal - are developing the new game, Gotham Knights. 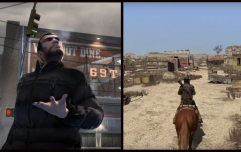 END_OF_DOCUMENT_TOKEN_TO_BE_REPLACED

However, while Arkham Knight did end with the "death" of Bruce Wayne/Batman, and the plot of Gotham Knights involves four of Batman's proteges attempting to fight the rise in the crime in the newly Batman-less Gotham, Gotham Knight and those Arkham games are unrelated, story-wise.

To complicate matters further, Rocksteady are currently working on their own DC game - titled Suicide Squad: Kill The Justice League - which actually is set within that same version of Gotham from the Arkham games, though that game currently has no set release date.

On the plus side, WB Montreal has just released the official date that all of us DC lovers can play their new Gotham-set game.

Gotham will always need its heroes. Suit up for an all-new adventure on 10.25.22. #GothamKnights pic.twitter.com/d7oV2LbcT8

END_OF_DOCUMENT_TOKEN_TO_BE_REPLACED

Gotham Knights will allow players to control Nightwing, Batgirl, Robin, and Red Hood as they take on the legendary Court Of Owls, a secret society that has been controlling Gotham from behind the scenes for centuries.

The game can be played solo, but also allows for a two-player mode where someone can drop in to your game and control one of the fellow heroes from the roster and play for as long or as little as they like, before dropping out and allow the in-game A.I. to take that character over again.

popular
Bus Éireann’s service from Dublin to London will restart this week
Gardaí are going global with new roles created in UAE and Bangkok
Gardaí unveil new Armed Support Unit vehicles to replace older models
A star-studded crime thriller is among the movies on TV tonight
Amazon Prime Video has just added 51 big movies to its library
The full list of cancelled flights in and out of Dublin Airport on Monday (so far)
An action-packed thriller is among the movies on TV tonight
You may also like
6 days ago
The free subscription games coming to PlayStation and Xbox in July
6 days ago
JOE Gaming Weekly - Why you should avoid the new Blade Runner game
6 days ago
Fan remakes Simpsons: Hit and Run as open-world game and it looks amazing
1 week ago
The top 5 must-play games of 2022 so far
1 week ago
QUIZ: Can you name the video game from the lead character?
1 week ago
JOE Gaming Weekly - The new Teenage Mutant Ninja Turtle game is a pure hit of nostalgia
Next Page