Have you found "The Wolf Man" in Red Dead Redemption 2 yet? This is how

It isn't even the weirdest thing that players have found in the game...

It is fair to say that Red Dead Redemption 2 is a success.

The most successful opening weekend for anything in entertainment history, including any movies involving Star Wars or the MCU.

END_OF_DOCUMENT_TOKEN_TO_BE_REPLACED

It has also sold more copies in its first eight days than the first Red Dead Redemption did in the last eight years.

It has also been hugely successful with critics, despite it being a little too realistic for its own good, which resulted in fans getting more than a little heated towards anyone who didn't confess their undying love for it.

While the main mission is said to last anywhere between 60 and 100 hours (depending on how good you are/how streamlined you play it), there is a lot of side missions to wade through too, and a lot of hidden features, characters, locations, and secrets to uncover.

First of all, how to find him.

On the map, head to the R on Roanoke Valley, as below: 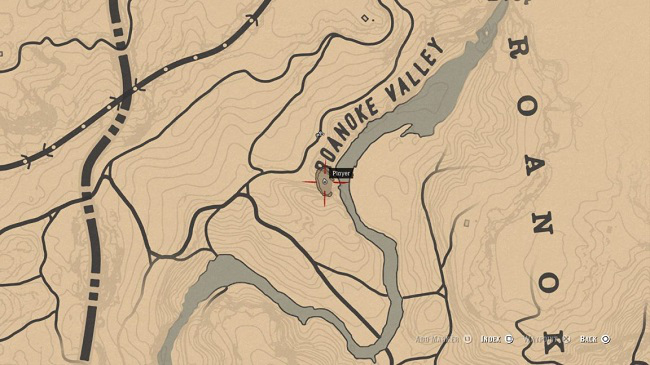 END_OF_DOCUMENT_TOKEN_TO_BE_REPLACED

Also, there's no point in heading there during the day, as all you'll find is a little camp fire.

But if you go at night, you'll find a feral man, who runs towards his cave if you get too close to him.

If you head towards the cave, then a pack of wolves will attack you. If you decide to kill all of the wolves, and head into the cave, you'll find the naked, hairy man crying. You'll also find a diary, which if you pick up, is exactly when the feral man stops whimpering and turns into an attacking savage armed with a knife.

You'll then have to kill him, and the cave doesn't really have anything worth taking - mostly some carcasses and some food - and the diary itself tells the story of a boy who ran away from home and was then raised by wolves.

So... really, you probably shouldn't have come out to meet him in the first place, because you just killed an innocent man, you animal!

Here is a video of someone who did exactly that, and we're sure they're racked - RACKED! - with the guilt of it now...

popular
The JOE Movie Quiz: Week 166
QUIZ: Test your skills to the limit with this General Knowledge Quiz
The JOE Friday Pub Quiz: Week 306
Family of Ashling Murphy share heartbreaking tribute at Fleadh Cheoil
QUIZ: Can you score 12/15 in this difficult General Knowledge Quiz?
One of the best Irish films of recent years is among the movies on TV tonight
Man in his mid-20s dies in two vehicle collision in Cork
You may also like
1 week ago
QUIZ: Can you name the video game from the cover art?
1 month ago
QUIZ: Can you name the video game from the lead character?
4 months ago
Exoprimal has the greatest plot for any video game. Ever.
9 months ago
In conversation with Laura Bailey, one of the most famous performers in video game history
1 year ago
Taking a look at the seven huge games trailers that dropped this week
1 year ago
Returnal is either the best game or the worst game of 2021, depending on what type of gamer you are
Next Page