It is part of their Play At Home initiative.

Last year, Sony gave away two free games to all PS4 owners - Uncharted: The Nathan Drake Collection and Journey - as part of a stay-at-home initiative by the console creators, designed as a way to encourage gamers to stay indoors during the pandemic.

This week, they have announced that they are giving another game away for free, this time to all owners of a PS4 and a PS5. 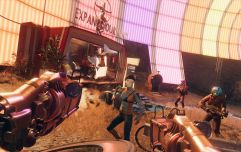 END_OF_DOCUMENT_TOKEN_TO_BE_REPLACED

Ratchet & Clank is available to download for all owners of either console, completely free of charge, and without a need for any subscription, until Wednesday, 31 March.

The 2016 game is a re-imagining of the first Ratchet & Clank game, released way back in 2002, and was received very well by critics, scoring 85% on Metacritic.

Additionally, Sony have announced that they will be making more games available as part of their Play At Home Initiative, for both PS4 and PS5 right through to June, although those titles have yet to be announced.

And if you decide to download Ratchet & Clank and enjoy it, you'll be very happy to hear that the sequel, Ratchet & Clank: Rift Apart, is set to arrive on PS5 on Friday, 11 June.

The Big Reviewski || JOE · The Big Reviewski with Ray Liotta, Goodfellas facts & Tom Hanks making us cry
popular
National minimum wage in Ireland to be increased in the coming year
One of the most-anticipated movies of the last few years is finally available to watch at home this week
Revolut finally rolls out feature which allows users access wages before payday in Ireland
QUIZ: Can you name the flavour of crisps just from the packet?
Leo Varadkar told he sees "homes as an investment" during heated debate in Dáil
Frontline workers could receive bonus payments or time off for efforts during pandemic
The G.O.A.T. crime film and loads more great movies are coming back to Netflix
You may also like
3 weeks ago
These are the free subscription games coming to PlayStation in September
1 month ago
These are the free subscription games coming to PlayStation and Xbox in August
1 month ago
10 of the best deals in PlayStation's summer sale
2 months ago
Netflix to start offering video games as part of service
2 months ago
WATCH: Sony reveal 9 minutes of Deathloop, their next big PS5 release
2 months ago
Grand Theft Auto 6 reportedly not set to arrive until 2025
Next Page