FEATURE: 26 songs that will instantly remind you of the Gaeltacht

Céilís. Craic. Shifting. Mashed potato. Get ready for a trip down memory lane...

Ahhh, the Gaeltacht. A rite of passage for every Irish teen. Three weeks of summer spent in  Connemara, having the craic, meeting new friends and maybe even learning some Irish.

Sure, you were away from mammy's food, crammed into a room with five other sweaty teens and hopelessly inept at the language, but for the most part, it was fun. 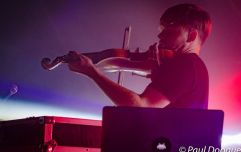 END_OF_DOCUMENT_TOKEN_TO_BE_REPLACED

For most, music was a huge part of the experience. There were always people with guitars, fiddles and a range of other instruments, with the ability level ranging from those with a negligible grasp of three chords to musical savants.

Whether it was the song for a competition in the coláiste, a pop favourite as Gaeilge or one that you were forced to learn by the teachers, some tunes instantly remind us of the Gaeltacht. We managed to pick our 26; did we leave any out?

1. Is Cuimin Linn (Remember When as Gaeilge) – Heathers

Fondly remembered as 'that tune from the Discover Ireland ad'.

Performed every morning along with that old Gaeltacht stalwart, Maidin ag Gealadh

Before Ed Sheeran's horrific effort, we had the Mundy favourite that ALL OF US know by heart.

To some, it almost causes aural bleeding. To others, it is art.

A catchy tune made outrageously complicated by translating it to Irish - we sang it in English down the back of the bus anyways.

A trained monkey could play it on the guitar, and all the culchies would know the tune for the amhrán an tí.

Hard to specify a song - Holiday and Boulevard of Broken Dreams definitely got aired several thousand times after the Bean an Tí served up the daily horror for dinner.

The quintessential Gaeltacht song, to which all others aspire. From Malin to Mizen, every Irish person of a certain age knows this Coronas anthem.

Not quite sure why this one applies, but it definitely does - another one that was roared from the back of wheezing buses around Connemara.

We thought we were so soulful and romantic playing this one for all the girls at the back of the halla. We weren't.

Few things have been disgraced by young guitar players as much as this one.

This one was very ambitious for the amhrán an tí - you'd have to do some serious coaxing to get that lad from Belmullet to attempt the falsetto along with the rest of you.

13. Somewhere Over The Rainbow

There was always one chancer with a ukulele.

Another one for the aspiring Slashes out there, almost hard to do wrong.

Often, the crowd in the halla would sit in painful silence as one or two incompetent backing vocalists messed up the timing of their Hos and Heys

In the aftermath of Pitch Perfect, everyone in the Gaeltacht attempted this one. Most failed.

The less said about Irish versions of this, the better.

We usually got the 'gairim gairim' line right, the rest was up to your proficiency at Irish.

This absolute belter got aired at the highlight of any Gaeltacht week - aifreann (mass). The braver ones among us attempted cheeky harmonies.

The recipe for rowdiness. Hearing the intro to An Dreolín was generally accompanied by loud screaming and followed by some severe céilí shape-throwing.

The fecking ukulele again. If Irish students had to pay royalties for borrowing pop melodies, Jason Mraz would be a multi-trillionaire by now.

The third song that the chancer with the ukulele knew (completing the repertoire).

Like Ho Hey, easily ruined by the questionable backing vocals of unwilling participants singers from your house.

The song that put Lurgan on the map (and subsequently The Late Late Show) captured hearts, minds and ears across the country when it came out.

popular
QUIZ: How will you fare in our ‘Not as it seems’ quiz?
Can you get top marks in Week 57 of JOE's 19 in 90 quickfire quiz
Principal of Carlow school denies claims female students were asked not to wear tight leggings to school
Eir CEO says opening a call centre in Sligo was a "mistake" as staff weren't sufficiently skilled
QUIZ: How well do you remember the final season of Game of Thrones?
Video: So what exactly did John Terry say to Anton Ferdinand?
Two homeless men found dead in Dublin
You may also like
1 month ago
JOE’s Song Of The Day #869 – Pádraig Bennett 'The Two of Us'
2 months ago
Missing gigs and music in general? Have no fear, we're hosting a private video premiere party with Wild Youth
2 months ago
Kylie Minogue, Gary Barlow and The Coronas on the bill as lineup for Concert4Cancer revealed
3 months ago
New Dermot Kennedy music video shows a locked down Dublin "at a standstill"
6 months ago
Irish band looking for public to star in brand new music video
7 months ago
This new Irish song is the lockdown 'LOVE' you need right now
Next Page