8 things that Irish people just can't get over

This article could alternatively be named, things you've definitely heard your mother say at some stage in your life.

Irish mammies, and indeed, Irish people in general are notoriously disbelieving when it comes to every day events. We're unable to get over things.

Without further ado, here's the definitive list of things that Irish people "Can't get over."

"I can't get over... the stretch in the evenings"

There are few things Irish people believe less than the stretch in the evenings. Even though it happens every year, we're constantly caught by surprise by how bright it is at 8pm in May. 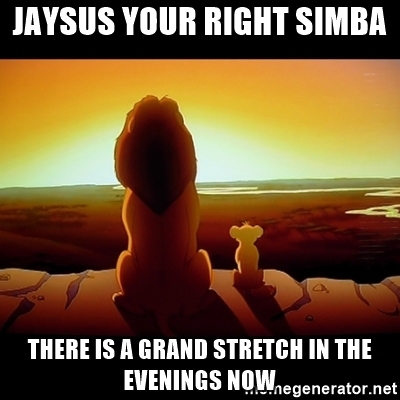 Who could have seen it coming?

We get about seven scattered warm days each summer, and it's safe to say that they're unexpected when they come along.

This phrase could often be followed by; "It's boiling for rain" or "We could do with a drop of the rain for growth now." This is only applicable in rural areas.

END_OF_DOCUMENT_TOKEN_TO_BE_REPLACED

"Would you believe I only hung these out 25 minutes ago? They're bone dry now, feel them. Go on, feel how dry they are."

A combination of warm weather and a strong breeze makes for ideal drying conditions, and we just can't get over how quickly the clothes on the line dry off after a spin in the washing machine.

How could they be so wet mere minutes ago and yet so dry now. Surely there's some sorcery at play?

END_OF_DOCUMENT_TOKEN_TO_BE_REPLACED

Usually said by an aunt or neighbour who hasn't seen you in a while, will probably be accompanied by an assertion that; "You're getting taller every time I see you."

Disclaimer, you're probably not that tall, they just haven't seen you in eight years. Naturally you sprouted a good two feet between nine and seventeen.

Often said after meeting a neighbour outside mass. It's a u-turn from saying how fresh they looked just a week earlier.

"I can't get over how shook (insert name here) got? He looks just awful, he hasn't got long left now."

"I can't get over... the amount of midges out this evening"

You're sitting outside your house. The BBQ is on and you've a beer in your hand. It should be paradise, but it's not, you're being assaulted by a battalion of midges biting at your scalp.

The year is feckin' flying isn't it? It's September already. Jesus, it's Halloween next and as soon as that's over they'll have the Christmas decorations up.

Would we want to be drawing out our Secret Santa now, just so we're prepared?

"I can't get over... how short mass was this morning"

Did he do any sermon at all? He must be in a rush, he did the bare minimum this morning.

You inevitably arrive home to a quiz of; "Who said mass?" and "What was his sermon about?"

They want to make sure you actually went to mass this week and they can't understand how else you're home so early unless you either didn't go or left immediately after communion.

Tip: Never ever say you left immediately after communion.

popular
The JOE Friday Pub Quiz: Week 272
Irish people among the heaviest drinkers in the world, new survey finds
One of the best Irish movies ever made has just been added to Netflix
One of Keanu Reeves' best movies has just been added to Netflix
Here's the lineup for tonight's Graham Norton Show
8 gorgeous Irish Christmas markets you need to visit this winter
TG4 reveals its very impressive line-up of Christmas movies
You may also like
1 week ago
Who tweeted it: Simu Liu or Rahul Kohli?
2 weeks ago
Cow escapes field, heads to resort and gets stuck on water slide
2 months ago
Drunk man reported missing ends up joining search party to find himself
3 months ago
WATCH: The interview between Niall Horan and Lizzo is an absolute flirt-fest
7 months ago
Shrek fan notices X-rated Easter egg that we all missed as kids
9 months ago
"I am not a cat" - Texas lawyer turns on kitten filter during court Zoom, and can't switch it off
Next Page