Reeling in the Years: 10 iconic viral heroes we came to (briefly) know and love this past decade

Where oh where have the past 10 years gone? Like the blink of an eye, a whole new decade has come into play.

There has been no shortage of memorable characters over the past decade. From bats in the kitchen to slips on the ice and frostbit toes, this is one journey that most certainly wasn't unnecessary.

Here is our pick of the best of the bunch: 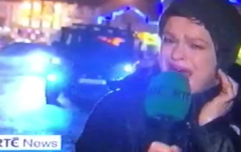 END_OF_DOCUMENT_TOKEN_TO_BE_REPLACED

To say this is iconic would be an understatement. Tadgh Fleming's thick Kerry accent makes it roughly 14,000 times funnier than it would be otherwise, but that's beside the point.

Here you have it in all its glory. From Maureen behind the door to the poor dog relieving himself out of sheer terror, it's nothing short of solid gold and even earned them an appearance on Jimmy Kimmel!

END_OF_DOCUMENT_TOKEN_TO_BE_REPLACED

This wasn't just a news broadcast, it was the beginning of something truly special. Four years later, shame on you if you make it through a storm without telling someone not to make unnecessary journeys.

Storm Desmond might have had rain, but Teresa Mannion stole the thunder.

Keeping with the extreme weather trend here. Back in 2015, the world was introduced to the most glorious accent you will ever find.

Needless to say, Ruairi McSorley proved to be a global phenomenon.

Stories like Fernando's only come around once in a generation. When it came out that the Ballybrack FC flyer was not in fact dead, as had initially been claimed by the club, the headlines simply wrote themselves.

Thankfully Fernando was able to see the funny side of it as well. A true legend of our time.

This is another case of the accent making it infinitely more fantastic. There are hill starts, and then there are "hill shtyarts."

The son definitely could have kept the joke going for another while to see what other gems he would come out with.

This one is brilliant in a completely different kind of way. Rather than choose to pay tribute to his dear friend with a standard eulogy, this Kerry man decided to stand up on the bar and sing Mr Brightside.

Actually no, he didn't sing it. He absolutely belted it out and got the entire place involved to give his friend Ger a fitting sendoff.

For those of you who have never done it, vox popping is hard. You never really know whether or not anyone will be willing to talk to you, or if they'll say anything interesting.

Then this guy comes along and dishes out 30 seconds of champagne moaning. The phrase "ponce and wonce" doesn't really get the credit it deserves.

While the man himself and a video in his honour may have originated outside of this decade, the legendary pintman saw something of a revival in the last few years. Rising up through the mist like a man hungry for Maureen's fry, Paddy Losty has etched his name into the annals of Irish history.

Even if you've watched it before, we strongly recommend you go at it agin.

It's a pity that social media wasn't around when this clip was first aired. Then again, we sincerely doubt something like this would ever be shown live on television anymore.

Thankfully, the legend that is Pint Baby didn't fade into legend, but instead was brought back into our lives for a whole new generation to enjoy. Bravo, Pint Baby.

1. The man who slipped on the ice

You thought we had forgotten him, didn't you? There is no way on earth we would ever turn down the opportunity to add this clip to a list, even if it's totally unrelated.

Though it lasts only a second, this slip (on a treacherous road many years before Teresa's warning) will undoubtedly echo through the generations.

It wouldn't have been right not to mention this man. Don't think we need an explanation as to why...

This guy on RTE news just doesn't give a fuck ?? pic.twitter.com/JEHihKftdD

This sheep farmer from Kerry is another who was very unfortunate not to make the final cut.

Gardaí in Co Kerry are investigating the theft of up to 60 sheep on Mount Brandon pic.twitter.com/85bJRIGrsb

Losing your soup is something no one should have to go through. Totally understandable how much it affected this man.

The Big Reviewski || JOE · The Big Reviewski with Y: The Last Man, that Malignant ending & a secret streaming service
popular
Cork City Centre described as a "no go area" after man pulled from wheelchair in violent attack
A fantastic Tom Hanks performance is among the movies on TV tonight
WATCH: Margaret Thatcher was briefly resurrected at the Emmy Awards
The Big Reviewski JOE Movie Quiz: Week 120
The 50 most iconic songs of all time* have been revealed
"Vile" and "homophobic" protest outside Leo Varadkar's home condemned by TDs
The US travel ban looks set to be lifted for vaccinated EU passengers
You may also like
3 years ago
Someone has finally painted a Teresa Mannion mural in Salthill
4 years ago
As Storm Barbara hits Ireland hard, the Irish public are crying out for one intrepid RTÉ reporter
5 years ago
PIC: This Teresa Mannion-themed float won first prize at the St. Patrick's Day Parade in Spiddal
5 years ago
TWEETS: Teresa Mannion just gave an election report and everybody on Twitter was thinking the same thing
5 years ago
VIDEO: Teresa Mannion has delivered a last-minute warning to Santa
5 years ago
VIDEO: 800 people in Cork Opera House go crazy for the Teresa Mannion dance remix
Next Page