A man's trip to the toilet has turned into one hell of a story. James Michael Grimes ended up in the sea, treading water for 20 hours.

His only company, jellyfish and sharks. And his only food - wood.

Grimes, 28, was on a Carnival cruise ship with his family, the night before Thanksgiving - November 23 - when he left his companions to use the bathroom around 11 pm.

"The next thing I know, I regained consciousness. I was in the water with no boat in sight," Grimes told Good Morning America (GMA) of his experience, that saw him have to battle rip currents, and the great threat of the unknown below. 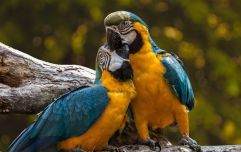 Parrot gets stuck on roof, tells firefighter making rescue attempt to "f**k off"

END_OF_DOCUMENT_TOKEN_TO_BE_REPLACED

But he survived to tell the tale. He told GMA he kept his eyes on the stars and the moon above, deciding early on that he wanted to survive no matter what.

"I felt like I was given a chance right then... you're alive for a reason... that [fall] could've killed me, but I felt like from that moment on, I was trying to stay positive," he continued.

"And, you know when you're here, you're still alive for a reason. So, all you got to do now is swim and survive. I was hoping they will start looking for me, they will find me eventually," Grimes said.

But they didn't find him in hurry and a lot happened before the US coast guard eventually did.

END_OF_DOCUMENT_TOKEN_TO_BE_REPLACED

At one point, a large sea creature came up to Grimes "real quick" and bumped his leg, so he kicked it before it could get a chance to latch on.

"It scared me not knowing what it was or how big it was – all I could see was a fin," he said.

To deal with his hunger, Grimes resorted to eating what he came across. He think he ate some bamboo that floated past.

Grimes said that his religious faith and family kept him going. "I wanted to see my family and I was dead set on making it out of there," he recalled.

"I was never accepting that this is it, this is going to be the end of my life. I'm 28 years old. I'm too young. This is not going to be it.

"I always thought there's a greater purpose for my life. Now, I know for sure I'm meant to do something on this Earth."

Grimes continued: "It was just the Lord was out there helping me, giving me strength and helping me stay afloat."

After noticing Grimes missing, his family alerted the cruise staff who notified the US Coast Guard. By then, 12 hours had passed and it was another eight before he was found.

The mystery of how Grimes got in the water remains.

Carnival Valor explained that they do have safety barriers which ensure people don't fall overboard, which was backed by the US Coast Guard.

In a statement shared with ABC News, the Coast Guard said: "We greatly appreciate the efforts of all, most especially the US Coast Guard and the mariner who spotted the guest in the water.

"Cruise ships have safety barriers in all public areas that are regulated by US Coast Guard standards that prevent a guest from falling off. Guests should never ever climb up on the rails."