Met Éireann have followed up on the previous nationwide snow-and-ice warning, extending it by 24 hours.

Snowy conditions have impacted various counties across Ireland over the last two days, and it turns out that the bad weather is actually here to stay for longer than predicted.

A statement issued by Met Éireann on Thursday at 11am reads: "Updated Thursday morning:

"Continuing very cold until Sunday with severe frosts at night and ice on untreated surfaces.

"Some snow accumulations today on high ground over Leinster, Connacht and south Ulster. Tonight there will also be some accumulations of snow on lower levels over central and southern parts of Leinster and over east Munster."

While it was originally thought that the worst would have passed by midday on Saturday, the warning has now been extended an additional 24 hours, and will elapse on 3 February at the earliest. 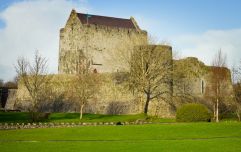 END_OF_DOCUMENT_TOKEN_TO_BE_REPLACED

Low temperatures are also to be expected — following on from last night's low of a bitter -5.8 degrees Celsius in Dublin.

As noted earlier today, Northern Ireland is not included in Met Éireann warnings, but forecasts for the six counties can be found on the Met Éireann website.