One Irish musician made Barack Obama's Favourite Songs of 2018 list

We said it before, we'll say it again. The guy has good taste!

If you haven't heard it yet, we fully recommend you check it out now:

The singer has made headlines recently himself, as he released a cover of a Van Morrison song purely because Blindboy dreamt about it once, which you can listen to right here. 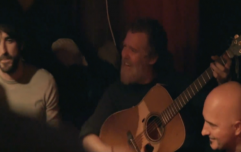 END_OF_DOCUMENT_TOKEN_TO_BE_REPLACED

"As 2018 draws to a close, I’m continuing a favorite tradition of mine and sharing my year-end lists. It gives me a moment to pause and reflect on the year through the books, movies, and music that I found most thought-provoking, inspiring, or just plain loved.

"It also gives me a chance to highlight talented authors, artists, and storytellers – some who are household names and others who you may not have heard of before. Swipe through to see my best of 2018 list – I hope you enjoy reading, watching, and listening."

In case you're wondering, Obama's favourite movies for 2018 were as follows: Annihilation, Black Panther, BlacKkKlansman, Blindspotting, Burning, The Death of Stalin, Eighth Grade, If Beale Street Could Talk, Leave No Trace, Minding the Gap, The Rider, Roma, Shoplifters, Support the Girls, Won’t You Be My Neighbor?


popular
QUIZ: How well do you remember these classic PS2 games?
Baby Yoda toys are finally going to hit the shelf
Donald Trump takes aim at Parasite's Oscar win because the movie is from South Korea
Here are all the best new titles coming to Netflix in March
New weather warning issued for three counties
Mary Lou McDonald wins most votes, but no Taoiseach elected after first sitting of 33rd Dáil
Laura Whitmore hits out at paparazzi photographing her following Caroline Flack's death
You may also like
1 day ago
Artists like Dave and Stormzy are leaving a legacy that no other modern artist can compare to
2 days ago
Foo Fighters are touring this summer and an Irish gig is looking very likely
2 weeks ago
Dublin venue to host a belting evening of non-stop Bruce Springsteen tunes this month
2 weeks ago
ABBA are hoping to release new music later this year
2 weeks ago
Gang of Four’s Andy Gill has died aged 64
3 weeks ago
Rage Against The Machine add two more dates to their 2020 reunion tour
Next Page