PIC: An Post has taken its legendary delivering status to another level with letter to Leo Varadkar

There are umpteen examples that An Post is the best delivering service in Europe, no scrap that, in the entire World.

They have proved themselves time and time again, whether they are delivering letters with no details to James Connolly Memorial Hospital in Blanchardstown or being set a challenge to find Brid and Seamus in Mallow who received a letter from Argentina, they always deliver (honestly no pun intended). 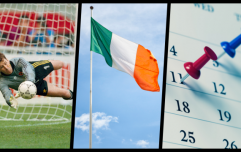 Five of the best dates for a new bank holiday in Ireland, as decided by us

END_OF_DOCUMENT_TOKEN_TO_BE_REPLACED

Their latest delivery was to none other than Ireland's newest Taoiseach, Leo Varadkar. Fair enough, Varadkar is a well-known public figure but just because he is the leader of the country, doesn't mean he is easily found.

The Fine Gael leader took to Twitter to praise An Post who managed to get the letter to Varadkar's post box with just four details, his name, his position, Castleknock, Dublin 15.

Varadkar said "well done to An Post for delivering this" and we would also like to applaud them on their outstanding service, they never fail to surprise us.

Well done to An Post for delivering this pic.twitter.com/xm1KU1ih88

The Government implemented EirCode in order to make it easier for letters to find their way around this little country but even without it, they are still managing to get the job done.

While the majority of the comments under the picture were very positive toward the postal service, one Twitter user wasn't so convinced by An Post's terrific job.

In fairness they could write "Leo, not the lenister lion, Ireland" and it could have arrived.

An Post doesn't need any more challenges to prove its worth and as Dara O' Briain points out in this video, once you get a letter to Ireland, they will take care of it from there.

The Big Reviewski || JOE · The Big Reviewski with Andy Serkis, Squid Game follow-ups & the return of Succession
popular
Investigation launched after window smashed at Canada Goose store in Dublin
The JOE Movie Quiz: Week 124
QUIZ: Get your quiz on with this General Knowledge Quiz
The 10 best insults from the first two seasons of Succession
QUIZ: Can you master this General Knowledge Quiz?
The JOE Friday Pub Quiz: Week 265
Micheál Martin says Government "not contemplating going backwards" on Covid-19 restrictions
You may also like
2 days ago
Simon Harris outlines three urgent options for easing restrictions next week
4 days ago
Leo Varadkar: 22 October is not going to be 'Freedom Day'
1 week ago
Tánaiste Leo Varadkar dodges question on vulture funds in Dáil Éireann
1 week ago
Tens of thousands call on Irish government to challenge vulture funds
2 weeks ago
Ireland, the Berlin approach and the dire need for a housing revolution
2 weeks ago
Leo Varadkar "confident" Ireland will avoid blackouts this winter but says "nobody can guarantee it"
Next Page