Pic: This 'sexy' Minion outfit is one of the least appealing things you'll ever see

We don't condone this.

Lingerie company Elegant Moments have designed, created and distributed a sexy Minion outfit because apparently there are no regulations that prohibit doing something that terrible.

Minions have been flooding the internet since they were first introduced in the 2010 kids' movie Despicable Me, but we have reached critical Minion mass in the month following the release of their own feature-length film, Minions. 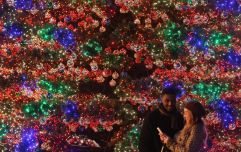 END_OF_DOCUMENT_TOKEN_TO_BE_REPLACED

It's safe to say that Minions jumped the sexy shark a few weeks ago, so there really is no excuse for this kind of thing.

The outfit comes complete with blue dungarees, a skintight yellow top and skull-cap and most importantly, the black goggles.

We're an open-minded bunch here at JOE, but it is safe to say that if you have ever sat down and thought 'I wish my wife was a little bit more like the little yellow fellas in that movie my kid likes', then there are deep-rooted issues that you must address.