Perfect for any cocktail-lovers in Munster.

When the sun is out, it's an unwritten law that 'Here Comes the Sun' by The Beatles has to be played on the speakers and it's fitting that 'The Fab Four' have inspired one of the cocktails that will be on the menu when the world's best bar arrives in Cork for one night only.

END_OF_DOCUMENT_TOKEN_TO_BE_REPLACED

Cask, in Cork’s Victorian Quarter, will be hosting a one-night-only bar takeover by London’s 'American Bar at The Savoy' on Wednesday, 1 May.

The Savoy’s 'American Bar' is the oldest cocktail bar in Britain and it's also one of the most renowned bars in the world.

During the one-night takeover, they'll be creating some of their favourite drinks and they're bound to go down a treat. 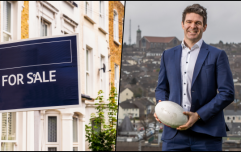 END_OF_DOCUMENT_TOKEN_TO_BE_REPLACED

The menu pays homage to the legendary musicians and songwriters that have entertained guests in the American Bar for decades, with each cocktail created with one of the bar’s most iconic songs in mind.

The takeover will be co-hosted alongside Cask’s Andy Ferreira and Carl d’Alton, who both represented Ireland internationally as winners of the World Class Irish Bartender of the Year competition in 2017 and 2018 respectively.

The American Bar Takeover event starts at 7pm on Wednesday, 1 May at Cask, which is is located at 48 MacCurtain Street in Cork’s Victorian Quarter, next door to Hotel Isaacs and Greenes Restaurant.

popular
The JOE Movie Quiz: Week 173
The JOE Friday Pub Quiz: Week 314
7 brand new (and classic) additions coming to Prime Video in October
QUIZ: Only the brightest will conquer this tricky General Knowledge Quiz
One of the most ridiculous blockbusters of recent years is among the movies on TV tonight
The JOE Music Quiz: Week 123
QUIZ: Name the country for each of these non-capital cities
You may also like
3 days ago
Man arrested after Garda vehicles repeatedly rammed in Cork by van with children inside
3 days ago
Gardaí launch investigation following discovery of baby's skeletal remains in Cork
1 week ago
Gardaí appealing for witnesses following car striking pedestrian in Cork
3 weeks ago
Localised flooding expected as Status Orange Rain Warning issued for Cork and Waterford
1 month ago
Man and woman seriously injured following assault with hammer and golf club
1 month ago
Cork hit with month-long hosepipe ban due to "severe stress" on resources
Next Page