Video: This could be the most bizarre and creepy telemarketer ever

Despite it all, this guy could have a career in narration...

We've all been called by a telemarketer at some stage in our lives, my usual go to response is to raise the tone of my voice and pretend my parents aren't home.

Apparently, some people do interact with them though, who knew? 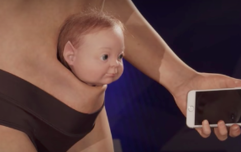 END_OF_DOCUMENT_TOKEN_TO_BE_REPLACED

When Mark called this woman in America trying to sell her something, the woman informed him that she too would be recording the conversation, and Mark grew very agitated.

He starts a whole spiel about being in charge which we must say is highly strange and reminds us of a soliloquy that the Joker from Batman would've produced.

He even throws in a line from the epic poem Marmion, by Walter Scott' "Oh, what a tangled web we weave when first we practice to deceive!"

He doesn't seem to be very good at his job however because when she asks him why he called, he seems to have simply given up, which makes us think that the whole thing might not be exactly above board.

Have a watch of this strange call below and prepare to ask 'WTF'?

popular
One of Keanu Reeves' best movies has just been added to Netflix
QUIZ: Can you get full marks in this General Knowledge Quiz?
The 50 most iconic songs of all time* have been revealed
Just in time for Christmas, all eight Harry Potter movies are now available to stream at home
QUIZ: Can you get 20/20 in this desperately tricky capital cities quiz?
QUIZ: Can you get 12/12 in this snappy General Knowledge quiz?
A great underseen thriller is among the movies on TV tonight
You may also like
3 years ago
We have absolutely no idea what this new Netflix trailer is for, but we're intrigued
3 years ago
Why is one of the world's richest inventors now selling flamethrowers to the general public?
4 years ago
The reason the World Taekwondo Federation has to change its name is brilliant
5 years ago
13 disgusting things everyone got tricked into googling at school
5 years ago
Man claims drinking his own urine has kept him healthy for 23 years
5 years ago
PIC: Irishman spots very strange figure in clouds during flight back to Cork for Christmas
Next Page