Try not to panic, but the world could have a serious wine crisis on its hands

Wine production around the world has fallen to historically low levels in 2017, levels not seen since the 1950s and the start of the 1960s.

According to data released by the International Organisation of Vine and Wine (OIV), production levels were at a historic low in Italy, France, Spain and Germany, while globally, production levels decreased by 8.2% compared to 2016. 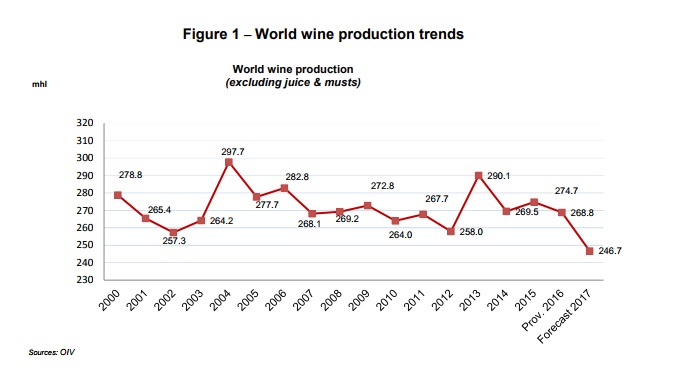 END_OF_DOCUMENT_TOKEN_TO_BE_REPLACED

Image via International Organisation of Vine and Wine

The world wine production for 2017 is estimated to be 246.7 million hectolitres (1 hectolitre = 100 litres), so the world isn’t exactly running out of the stuff, but such a significant decrease is not be sniffed at, particularly considering that three of the countries named above – Italy, France and Spain – are the world’s leading wine producers.

The estimated wine production for 2017 would cope with the estimated figure for wine consumption – without definitive figures, the OIV estimates it to be in the region of 240.5 to 245.8 million hectolitres – but the decrease in production could lead to a rise in prices and a problem for small producers of wine around the world.

Extreme weather events – from frost to drought – was blamed on such a dramatic decline in wine production in western Europe, while production increased or sustained levels from 2016 in the United States, South America and Australia.

We're not in a full-blown crisis just yet, but if this trend continues then excuse if we begin to panic just a little bit...

popular
International travel won't resume until August "at the earliest", says Leo Varadkar
Ryanair set to take first delivery of "Gamechanger" aircraft this month
The JOE Movie Quiz: Week 102
RTÉ to seek additional voluntary redundancies after 87% of staff reject salary cuts
Here are the restrictions being eased today as Ireland continues reopening
360 new cases of Covid-19 confirmed across Ireland
The 50 most iconic songs of all time* have been revealed
You may also like
2 years ago
Fanta Lemon fans rejoice, it's here to stay in Ireland
2 years ago
Donegal nightclub's new 'Bomb in a Bag' drink proves big hit at Donegal rally
3 years ago
Ed Sheeran fans will be able to order take-away while queuing for his gigs in Phoenix Park
3 years ago
Deliveroo are now delivering grub to public parks across Ireland
3 years ago
Coca-Cola is launching its first ever slushie
3 years ago
One of Ireland’s most beloved ice-creams is coming back just in time for summer
Next Page