The M50 northbound has reopened having been closed on Thursday morning due to a vehicle fire.

Dublin commuters using the M50 in both directions have been warned to expect significant delays following the closure of the M50 northbound on Thursday morning.

The M50 northbound was closed for a period of time following a vehicle fire between Junction 13 Sandyford and Junction 12 Firhouse, but it has since been reopened after the fire was dealt with by emergency services. 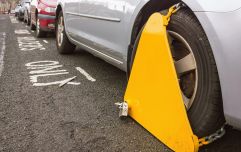 The worst areas for clamping in Dublin have been revealed

END_OF_DOCUMENT_TOKEN_TO_BE_REPLACED

Commuters have been warned to expect delays in both directions on the M50; as of 7.45am on Thursday, traffic is reported to be extremely heavy on approach, with southbound delays back to Junction 10 Ballymount.

Updates on the traffic situation will be available on Twitter via AA Roadwatch and Garda Traffic.


popular
COMPETITION: Win two nights B&B in the Knightsbrook Hotel for two people
QUIZ: How many of these characters from Breaking Bad can you name?
Disney+ has brought forward its launch date in Ireland and confirmed its price
Bank of Ireland warns customers to delete latest scam text from phones immediately
The creators of Star Trek: Picard put to rest one of the biggest fears fans might have about the show
QUIZ: Can you name the country for each of these non-capital cities?
Gardaí warn of phone scam that could cost consumers a "small fortune"
You may also like
3 hours ago
Man arrested after threatening Gardaí with knife and stealing cash in Dublin
1 day ago
Two men left in serious condition after ingesting "unknown substance" in Dublin
5 days ago
A homeless woman in her 20s has died in a Dublin hostel
5 days ago
Road closures to remain in place on Thursday morning due to farmer protest
5 days ago
Eoghan Murphy "saddened" by serious injuries to homeless man, removes campaign posters from scene
6 days ago
Man left in serious condition after his tent was removed as he slept in it
Next Page