For Day 8, we'll be looking back over 1982's cornerstone of modern horror, The Thing.

"Man is the warmest place to hide..."

END_OF_DOCUMENT_TOKEN_TO_BE_REPLACED

The thing about director John Carpenter is that you could fill up the majority of these 31 horror movie recommendations with just his back catalogue.

The Fog, Christine, Prince Of Darkness, They Live and at least one more movie which we will definitely have on this feature at some point (SPOILERS), Carpenter was untouchable when it came to horror for the best part of a decade.

However, when Carpenter released the snow-bound horror in the middle of the summer, featuring killer aliens, just two weeks after Spielberg released E.T., and audiences wanted their extra-terrestrials friendly and nice, The Thing absolutely flopped.

35 years later, it is considered to be one of the greatest horror movies ever made. 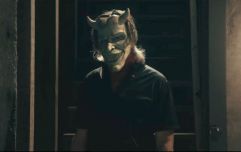 END_OF_DOCUMENT_TOKEN_TO_BE_REPLACED

Kurt Russell is the sorta-lead character, just one of a group of men holed up in an Antarctic research station, who find a dog being chased by a helicopter. Unsure of what exactly was going on, they decide to take the dog in, and it is quickly revealed that the dog is a shape-shifting alien, and it begins to kill and then assimilate the other life-forms within the base.

Once the men realise this, they soon realise that any one of them could be the alien, and there are very few ways of finding out who is really who they say they are...

END_OF_DOCUMENT_TOKEN_TO_BE_REPLACED

The Thing features some of the best visual effects ever put on film, as the alien changes from dog to human and everything in between in an attempt to escape the remote station and make it back to a more densely populated area, and the sense of isolation and inescapable horror that the men suddenly find themselves in is absolutely palpable.

Even all these years later, The Thing holds up incredibly well as a full-on, nightmare-ish horror movie with visuals that will be scorched into your brain as you head to bed later that night.

Plus there's that final scene, which will have you pretty unhappy no matter which what you think it might mean...

popular
NOW announces large reduction to its monthly membership prices
Fish and chips could be removed from Irish menus over rising fuel costs
Amazon Prime Video has just added 51 big movies to its library
Netflix has just added 33 very big movies to its library
The full list of cancelled flights in and out of Dublin Airport on Monday (so far)
Increase in passenger charges at Dublin Airport may be on the way
Waterford man sentenced to three months imprisonment for operating "cruel and illegal" puppy farm
You may also like
4 months ago
One of the scariest modern horrors is among the movies on TV tonight
4 months ago
You Are Not My Mother is arguably the greatest Irish horror movie ever made
5 months ago
WATCH: PlayStation reveals 10-minute gameplay trailer for its incredibly creepy new horror game
8 months ago
9 of the best horror movies on Netflix right now
10 months ago
The cast of the new Candyman reveal their favourite scary movies
1 year ago
There's a new horror film called Karen and it looks as bad as it sounds
Next Page