A documentary about Pelé is coming to Netflix next month

The documentary will be available for streaming on 23 February.

A documentary film about legendary Brazilian footballer Pelé is coming to Netflix in late February.

Directed by David Tryhorn and Ben Nicholas, the film charts Pelé's rise to stardom, as he became - and remains - the only player to win three World Cup trophies, the first of which he won at 17 years of age. 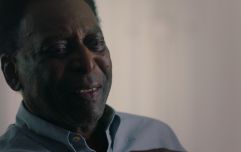 END_OF_DOCUMENT_TOKEN_TO_BE_REPLACED

With rare and exclusive filmed access to Pelé himself, the film emotionally showcases the star reflecting upon his impressive career.

The documentary also includes rare archive and interviews from former legendary team-mates at Santos Futebol Clube and the Brazilian national team, including Zagallo, Amarildo and Jairzinho, as well as extraordinary testimonials from family members, journalists, artists and other personalities who witnessed the golden age of Brazilian football.

Despite his incredible success in Brazil and on the international stage, Pelé can be a polarising figure, with many critics keen to pick holes in his supposed goal records.

But there is no doubt that he ranks among the best players of all time, alongside Diego Maradona, Lionel Messi and Cristiano Ronaldo.

House of Rugby Ireland · Ireland's feel-good win, Casey's initiation song, scrapping Sexton and Scott Williams interview
popular
Impact of vaccination on healthcare workers "phenomenal"
Eoghan McDermott to leave RTÉ after six years (Report)
Varadkar felt "very bad" for missing Irish reopening dates
QUIZ: Can you answer all the £1 million questions from Who Wants to be a Millionaire?
Someone in Ireland is €500,000 richer following Tuesday's EuroMillions draw
BBC reveals Season 6 of Line of Duty is coming later this month
Sony are giving away a free game to all PS4 and PS5 owners
You may also like
1 week ago
TOWIE star Mark Wright is officially the worst player on FIFA 21
3 weeks ago
Jamie Carragher reacts to hilarious TikTok remix combining on-air yelp with John Legend song
3 weeks ago
Roy Keane reacts to the dancing Keano FIFA TikTok meme
1 month ago
Mum's anger at state of £30 free school meals package in the UK
2 months ago
UK records highest daily total of new Covid-19 cases
2 months ago
Everton v Man City tonight postponed due to coronavirus outbreak
Next Page