Will Poulter cast in Amazon's Lord of the Rings series

A strong start on the casting front...

We know that Amazon has been looking for a Game of Thrones equivalent, or, indeed, champion, for some time now.

With production underway and anticipation patiently building, little has actually been revealed about the show. 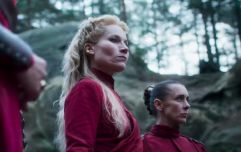 END_OF_DOCUMENT_TOKEN_TO_BE_REPLACED

Sure, there's been plenty of intense fan speculation, huge rights fees to get the thing in the first place, and the acquisition of one of Game of Thrones' most respected writers, but Amazon really has been keeping their take on LOTR tightly under wraps.

Here's a promising development, however; actor Will Poulter has signed on the dotted line.

You might remember him from The Revenant, Black Mirror: Bandersnatch, Midsommar, and coming very close to playing Pennywise in the IT reboot before Bill Skarsgård eventually won the role when that production went in a different direction.

In line with all that secrecy, the Variety scoop that confirms Poulter's involvement doesn't reveal just what character he is playing, but does note that the role was a hugely coveted one for young actors in recent months.

So it's a big win for the 26-year-old, whose presence in the show is an early indicator that they're looking to bring some pedigree to proceedings.

No release date as of yet, so keep that fantasy casting going for now...

The Big Reviewski || JOE · The Big Reviewski with Y: The Last Man, that Malignant ending & a secret streaming service
popular
President Biden warns trade deal must not derail peace in Northern Ireland
You could be shopping in an Aldi store with no checkouts in Ireland in the near future
Government announces special €1,860 payment for laid-off workers during pandemic
"One person's rent is another person's income" – Varadkar rejects calls for three-year rent freeze
Five of the most memorable moments from Never Mind The Buzzcocks
New special payment for workers laid off during pandemic - Who is eligible and what are they entitled to?
The film that predicted the pandemic is among the movies on TV tonight
You may also like
1 week ago
500 new jobs to be created as Amazon to open first Irish fulfilment centre
6 months ago
New survey shows 40% of people in Ireland bought from Amazon UK this year
7 months ago
Amazon set to open first fulfilment centre in Ireland (Report)
10 months ago
Amazon Prime Video causes chaos on social media after it united Ireland on Saturday
10 months ago
The best films to stream on Netflix and Amazon this weekend
10 months ago
QUIZ: Can you name all the heroes on The Boys?
Next Page