Essential viewing for any rap fan.

As amazing as Eminem's music career has been, it wouldn't be wrong to say that the movie 8 Mile is some of his very best work.

The real, gritty battle-rap world was one that people were extremely interested in, and people loved being able to get a better understanding of the culture. 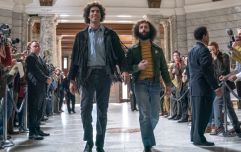 END_OF_DOCUMENT_TOKEN_TO_BE_REPLACED

We're gonna get an even closer look at this crazy world in the new Eminem-produced film entitled Bodied.

It's written by a Canadian battle-rapper named Alex Larsen (his rap name is Kid Twist), and it follows a student as he dives headfirst into the world of battle-rap.

The trailer shows the struggle that Adam Merkin will go through as he attempts to join a culture that feels as though he doesn't belong.

And the movie is now available to watch on YouTube. 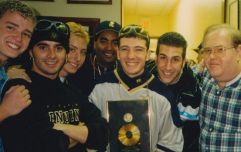 WATCH: New documentary presents the dark side of being in a famous boy band

END_OF_DOCUMENT_TOKEN_TO_BE_REPLACED

A big concern of rap fans may be that it won't be an accurate representation of the culture, but with guest appearances from rappers like Dumbfoundead, Dizaster, Hollow Da Don and Loaded Lux, we can be confident that they will get it spot on.

popular
QUIZ: You'll do well to get 100% in this General Knowledge Quiz
25 years ago, Sylvester Stallone delivered his best performance in a hard-hitting crime drama
QUIZ: How well do you really know Irish weather?
Applications for this year's Late Late Toy Show are now open
The new Garda uniform has finally hit the streets
Disney+ has just added 10 big movies to its library
QUIZ: Can you get 10/10 in this Irish sayings quiz?
You may also like
1 month ago
Fan remakes Simpsons: Hit and Run as open-world game and it looks amazing
8 months ago
Cow escapes field, heads to resort and gets stuck on water slide
1 year ago
Mafia fugitive caught after police found his cooking videos on YouTube
1 year ago
'Banned' documentary about the Queen temporarily leaked to YouTube
1 year ago
YouTube to remove presidential election conspiracy theory videos
1 year ago
Here are the Top 10 most-watched music videos in Ireland in 2020
Next Page