Bosco to appear on the Ray D'Arcy Show this weekend

Viewers are in for a dose of nostalgia this week on the Ray D’Arcy Show as the nation’s favourite puppet Bosco makes a return to our screens.

Bosco has graced Irish television screens for over 40 years, and D'Arcy will meet some of the super-fans and people involved in the show over the years. Bosco will also be chatting about his upcoming tour around the country. 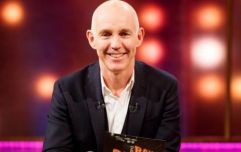 END_OF_DOCUMENT_TOKEN_TO_BE_REPLACED

The appearance follows the closure of the iconic Lambert Puppet Theatre, where the iconic puppet came from, earlier this year.

According to RTÉ, here's what else viewers can expect from 9.50pm on Saturday:

"Mrs Brown's Boys star Eilish O'Carroll will join Ray to talk about the visibility of older LGBT people in Ireland. She'll also give us the inside scoop on how the Christmas special read through went this week and what lies in store for Winnie McGoogan!

"Rally driving sensation, Rosemary Smith, will be in studio to talk about being one of Ireland’s first female rally car drivers and how she became a motorsport pioneer who broke through the gender barrier to compete in, and win, some of the biggest rallies in the world.

"And finally, Ray will be chatting to Victor (7) and Nicholas (5) Clarke to hear how they are helping to raise funds for the Magheracloone GAA Club in Co. Monaghan after they recently lost their pitch and facilities due to a sinkhole."