George R.R. Martin 'a little sad' at certain things HBO has done with Game of Thrones

As Game of Thrones enters its final episodes, the show's creator has expressed dissatisfaction at how his work has been adapted for television.

Game of Thrones has become a television phenomenon since first hitting our screens in April 2011.

Now in its eighth and final season, the HBO behemoth has taken us across seven kingdoms, two continents, myriad storylines and hundreds of characters.

END_OF_DOCUMENT_TOKEN_TO_BE_REPLACED

As it enters its final stretch, however, the writer of the A Song of Ice and Fire series of books, George R.R. Martin, has expressed his dissatisfaction regarding the manner in which his work has been adapted for television.

While the show remains incredibly popular, since moving ahead of the original source work (Martin is yet to finish the final books in the series despite the events of them currently taking place in Thrones) many viewers have criticised what they perceive to be the rushed nature of the show.

There was intense criticism for the recent episode, the third in the current season, The Long Night, with the scarcity of deaths to major characters seen by many as a sign that the show has lost its bite.

In a recent interview, Martin himself broached this subject, and admitted that he too is slightly disappointed with the way his story has worked out on television. 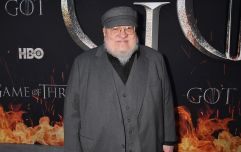 END_OF_DOCUMENT_TOKEN_TO_BE_REPLACED

"Of course you have an emotional reaction. I mean, would I prefer they do it exactly the way I did it? Sure," said Martin in the interview with Rolling Stone.

"You get totally extraneous things like the studio or the network weighing in, and they have some particular thing that has nothing to do with story, but relates to 'Well this character has a very high Q Rating so let's give him a lot more stuff to do'."

Martin said: "The series has been... not completely faithful. Otherwise, it would have to run another five seasons."

In another interview with Fast Company he added: "You know, it’s complex. I’m a little sad, actually. I wish we had a few more seasons."

popular
The JOE Friday Pub Quiz: Week 308
Netflix has just added 23 very big movies to its library
Controversial influencer Andrew Tate banned from Instagram and Facebook
One of 2022’s best hidden-gem comedy series is available to stream
Pilots fly over destination airport at 37,000 feet because they were both sleeping
Two Irish people arrested in "smuggling event" near Miami
Multiple fatalities after planes collide mid-air over California airport
You may also like
4 months ago
Netflix's answer to Game of Thrones has a very strong Irish connection
6 months ago
Ireland's new Game Of Thrones studio tour: A fitting monument to a staggering success story
8 months ago
Game of Thrones Studio Tour will open in Ireland in February 2022
8 months ago
"It has a Beauty & The Beast aspect" - Kristofer Hivju on his role in The Witcher Season 2
9 months ago
WATCH: The first 15 minutes of George R.R. Martin's video game are going to blow your mind
9 months ago
Ed Sheeran says Game of Thrones cameo backlash ruined the experience for him
Next Page