Graham Norton is a legend.

He's one of the best chat show hosts in the business, and his weekly show makes for some really enjoyable television.

But as good as he is, there's only so much an interviewer can do.

A lot of the pressure lies on the interviewee. Some are brilliant, but some can leave a little bit to be desired.

And that's exactly how Graham Norton felt about the legendary actor that is Robert De Niro.

Speaking to an audience at the Cheltenham Literature Festival, Norton said:

"He’s not a storyteller, or very verbal. 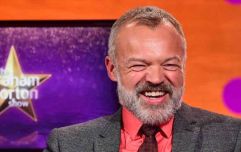 Here's the lineup for this week's Graham Norton Show

END_OF_DOCUMENT_TOKEN_TO_BE_REPLACED

"He’s a benign presence. Last time he started telling a story – he went on and on.

"We were all leaning in, willing it to be amazing... then he finally went, ‘why am I telling this?’ Nobody had an answer. We cut it."

Brutally honest, and actually quite harsh from the Corkman.