He's gone by Jonah Hill all his life, but this isn't actually his legal name

Jonah Hill has filed a petition to legally change his name. The actor, 38, has become a household name since his acting debut in The 40-Year-Old Virgin in 2006.

Since then he has starred in the likes of Superbad and 21 Jump Street and earned two Academy Award nominations for his supporting roles in Moneyball (2011) and The Wolf of Wall Street (2014). 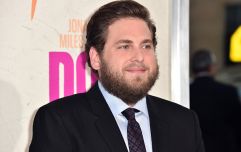 END_OF_DOCUMENT_TOKEN_TO_BE_REPLACED

But Hill isn't actually his real surname. The actor was born Jonah Hill Feldstein but has always gone by his middle name during his career.

Now, he has decided to drop Feldstein from his moniker, officially making his name Jonah Hill.

TMZ reports that the actor filed the petition in Los Angeles this week to legally lose the family name Feldstein from his name.

The documents state the Academy Award nominee wants the name he has publicly gone by for years to be his legal name.

END_OF_DOCUMENT_TOKEN_TO_BE_REPLACED

Jonah has one sister, actress Beanie Feldstein, whose first names are Elizabeth Greer.

Jonah follows in the footsteps of Aaron Paul, who earlier this month filed a petition to legally change his surname to Paul from Sturtevant and change the first names of his baby son.

The Breaking Bad actor, 43, was born Aaron Paul Sturtevant but adopted his stage name because it was an easier surname to pronounce.

He and his wife, Lauren Parsekian, have now filed to change their surnames as well as the legal first names of their 7-month-old son Ryden Caspian, who is currently legally named Casper Emerson.

popular
Conor Mcgregor hit by car ‘at full speed’ while cycling
Colin Farrell shouldn't win the Oscar this year
Parents left in shock after gorillas start mating in front of kids at zoo
S Club 7's Hannah Spearritt and children left homeless after being forced from home before Christmas
Netflix has just added one of the best sci-fi movies of recent years
New Netflix series deserves to be as big as Stranger Things
All of the new Netflix movies and shows arriving in February
You may also like
1 year ago
Jonah Hill asks fans to stop making comments about his body
5 years ago
QUIZ: Can you name the Jonah Hill movie from the Jonah Hill quote in that movie?
6 years ago
JOE meets Jonah Hill to talk War Dogs, 23 Jump Street, Simpsons spin-offs and his love of Ireland
6 years ago
Jonah Hill signs up to a brand new Netflix series
6 years ago
COMPETITION: Win tickets to see Jonah Hill's new film, War Dogs, before anyone else
6 years ago
WATCH: Leonardo DiCaprio pretends to be a fan, scares the sh*t out of Jonah Hill in New York
Next Page