PIC: This review of Fair City on IMDb is bang on the money

Fair City is the soap that has everything - murder, intrigue, weddings that never go off without a hitch... OK, it's pretty much the same as any soap opera since the term was first coined, but it's ours and we love it.

(It's also featured our own Eric Lalor as arch baddie Cathal Spillane, but he doesn't like to brag.)

Anyway, JOE reader Liam Macken has come across this glowing review of the goings-on in Carrigstown on the IMDb, and we could not have put this better ourselves. 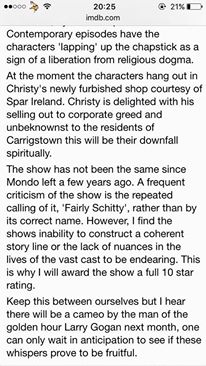