Samuel L. Jackson would be interested in returning to Star Wars

Now that Disney have purchased the rights for the Star Wars universe, the various spin-offs and canon films (i.e. Episode IX) are going to be massive tentpole features for decades to come.

Han Solo may have struck a deal to transport Luke Skywalker and Obi-Wan for 17,000 credits in A New Hope, but it's fair to say there's a lot more money to be made from the galaxy far, far away.

END_OF_DOCUMENT_TOKEN_TO_BE_REPLACED

Aside from the The Force Awakens, The Last Jedi, and the upcoming Episode IX, the Star Wars universe is absolutely packed with characters who could be developed in their own standalone films.

Of course, we've already been treated to Solo, and with the highly-publicised films about Obi-Wan Kenobi and Boba Fett seemingly in various stages of production, it's clear that Disney's plans to make more Star Wars films aren't exactly frozen in carbonite.

One man more than capable of handling himself is the baddest motherf**ker in the galaxy, better known as Mace Windu (Samuel L. Jackson). 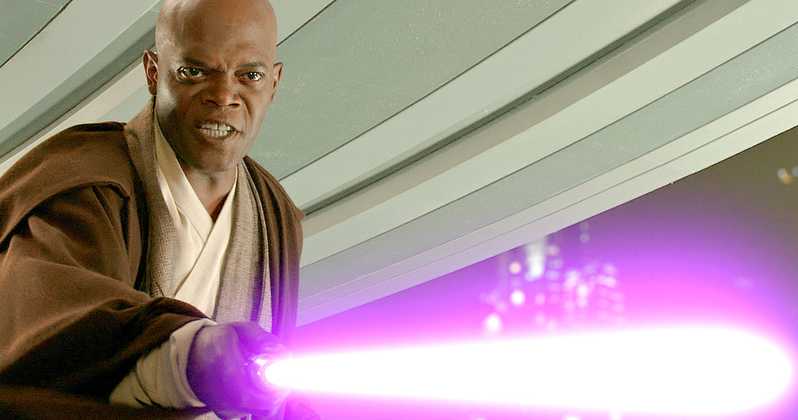 END_OF_DOCUMENT_TOKEN_TO_BE_REPLACED

Since making a somewhat muted debut in The Phantom Menace, the Jedi Master really cut loose in Episode II: Attack Of The Clones as he kicked ass during the Battle of Geonosis.

Who doesn't love the scene where he decapitates Jango Feet with that bitching purple lightsaber? See, we told you he was a badass.

Anakin's great vengeance and furious anger proved to be Master Windu's undoing as he met his maker in Episode III: Revenge Of The Sith. Honestly, we think he deserved a better death because Mace was absolutely beating the living snot out of The Emperor until he was betrayed. The dude was laying the smackdown on The Emperor. What a man!

Anyway, given the fact that he was a high-ranking member of the Jedi High Council and a General during The Clone Wars, we think that there's still plenty of story left to be told about Mace Windu.

END_OF_DOCUMENT_TOKEN_TO_BE_REPLACED

When JOE caught up with Samuel L. Jackson ahead of the release of Glass, the actor told us that he fancies a return to Ireland to play some golf. If and when he is in Ireland, we cheekily asked him if he would be interested in chatting with the Star Wars crew with a view to filming here, or returning to his character?

"I'm that guy. All they got to do is call," Jackson confirmed.

The Force would be very strong with that.

Take a look at our interview with Jackson in full below...

Fans of Unbreakable and Split don't have to wait long to see Glass as it's released in Irish cinemas on 18 January.

popular
New Netflix series deserves to be as big as Stranger Things
Netflix has just added one of the best sci-fi movies of recent years
BBC apologises after calling Paul Mescal 'British' in Oscar coverage
This is what the cheapest house for sale in Dublin looks like
Irish names among the top 10 hardest words for British people to pronounce
The 50 most iconic songs of all time* have been revealed
Barry Keoghan mentioned in UK Parliament speech during government debate
You may also like
1 day ago
A very funny horror comedy is among the movies on TV tonight
1 day ago
Here's the line-up for this week's Late Late Show, which will include an Irish Oscars tribute
2 days ago
Britain's Got Talent confirms David Walliams' replacement
2 days ago
One of the greatest horror sequels of all time is among the movies on TV tonight
2 days ago
Ireland represented in a major way in this year's Oscar nominees
2 days ago
Oscar nominations 2023: Full list of nominations revealed
Next Page