20 years ago, one of the best sci-fi movies of the 21st century was a box-office bomb

It's not often movies come with as much prestige attached to them as 2002 sci-fi drama Solaris.

Released on 27 November, the film stars George Clooney as Dr. Chris Kelvin, a widowed psychiatrist in the near future that is mysteriously summoned to a space station orbiting Solaris, a newly discovered strange planet.

END_OF_DOCUMENT_TOKEN_TO_BE_REPLACED

Arriving at the station, he discovers to his horror numerous crew members dead, along with two survivors (played by Jeremy Davies and Viola Davis) acting erratically.

Confused at first, Chris eventually realises that Solaris has the ability to manifest versions of the space station’s crew members’ loved ones - referred to as "visitors" - including the psychiatrist’s long-deceased wife Rheya (Natascha McElhone).

When it arrived in cinemas, the film saw Clooney re-teaming with the director of Ocean’s Eleven, Steven Soderbergh – who had also recently made the Oscar-winning movies Erin Brockovich and Traffic.

The project was also spearheaded by legendary blockbuster filmmaker James Cameron (Aliens, Titanic), who wound up producing the film and providing Soderbergh with advice throughout its production.

END_OF_DOCUMENT_TOKEN_TO_BE_REPLACED

As well as this, the movie was an adaptation of the novel of the same name by author Stanisław Lem. Before Soderbergh’s take on the story, the book had previously been brought to the screen via a critically acclaimed 1972 film by Soviet director Andrei Tarkovsky, someone considered by many as being among the best filmmakers of all time. 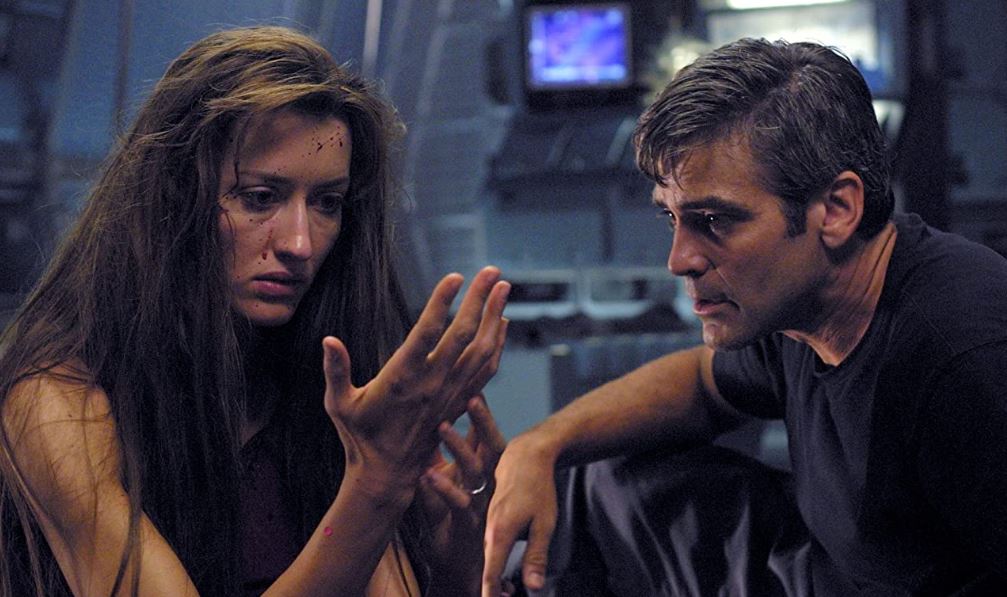 Given all the above, it’s fair to say that anticipation for the movie was quite high. However, the film wound up being a box office disappointment, grossing just $30 million on a $47 million budget.

And while some critics were kind to Solaris – the late and great Roger Ebert was one of its champions – certain audience members reacted to it with hostility, with the film earning a rare F grade from CinemaScore, a market research firm that monitors audience responses to movies through surveys.

END_OF_DOCUMENT_TOKEN_TO_BE_REPLACED

That said, revisiting Solaris 20 years after its release, it’s clear that its failure at the box office and the initial negative response it provoked in moviegoers had little to do with its quality.

For one, it retains the incredible premise of the novel and the Tarkovsky film - a group of astronauts observing a planet, who find the celestial body gazing back into them, plumbing the depths of their subconscious.

Also, like the 1972 original, the 2002 movie eschews the type of bombastic action or horror one might expect from a sci-fi tale, instead emphasising the emotional states of its characters.

As well as this, both versions take a minimalist and grounded approach to their fantastical story and as such feel like what might actually happen if humans were to be confronted with such a situation. 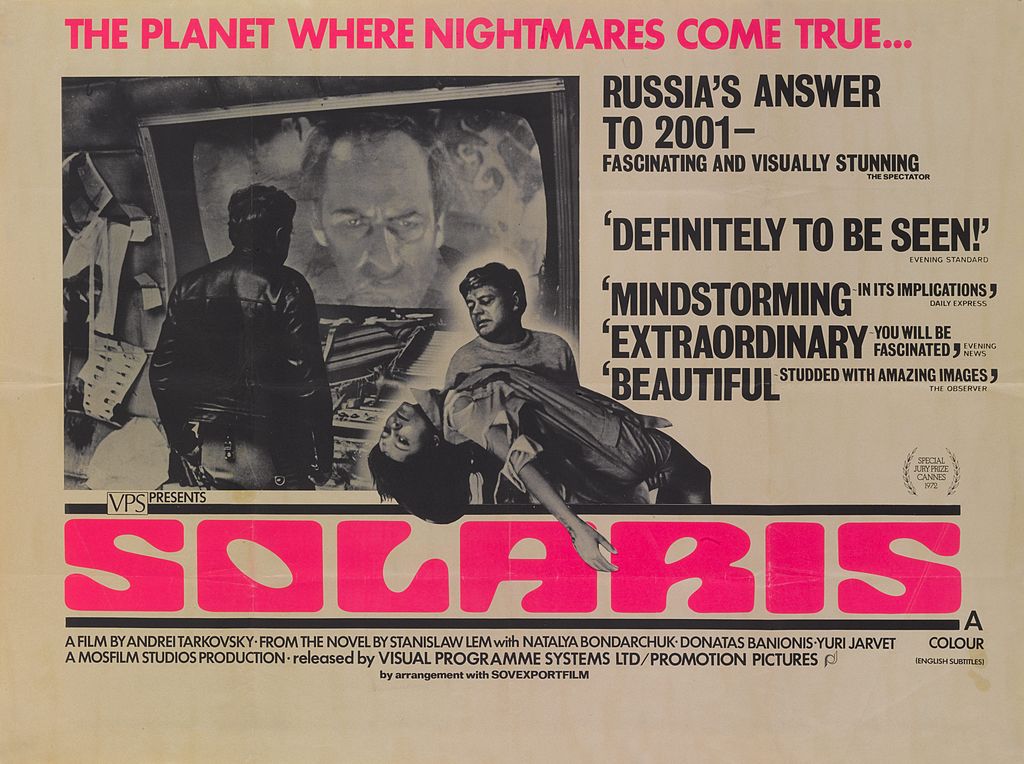 A poster for the 1972 version of Solaris

However, what makes Soderbergh's take on the story different from Tarkovsky's - on top of wisely cutting nearly 70 minutes from the original's whopping 166-minute running time - is that it makes the relationship between Chris and Rheya the core focus of the story. As such, the movie is far more emotional and romantic.

The 2002 Solaris opens with a series of scenes where we witness Clooney's Chris in various spaces - his house, his office, a train, a crowded street - in which he appears nearly completely isolated from the rest of humanity.

"Even before he goes into space, he's already in space in a sense, psychologically," Cameron says of the character on the movie's DVD commentary with him and Steven Soderbergh (which is well worth a listen for cinephiles as it's incredibly illuminating in regards to the film and filmmaking in general).

Over the course of the movie, we come to learn that Chris has become withdrawn after never fully getting over the death of Rheya, who took her own life after the couple had an argument.

That said, thanks to Solaris, Rheya reappears on the space station alive with no memory of her death. However, this is where proceedings get truly mind-blogging in that great sci-fi way.

Among the many questions posed are: Is this really Rheya or just a version of Rheya constructed out of Chris' memory of her? 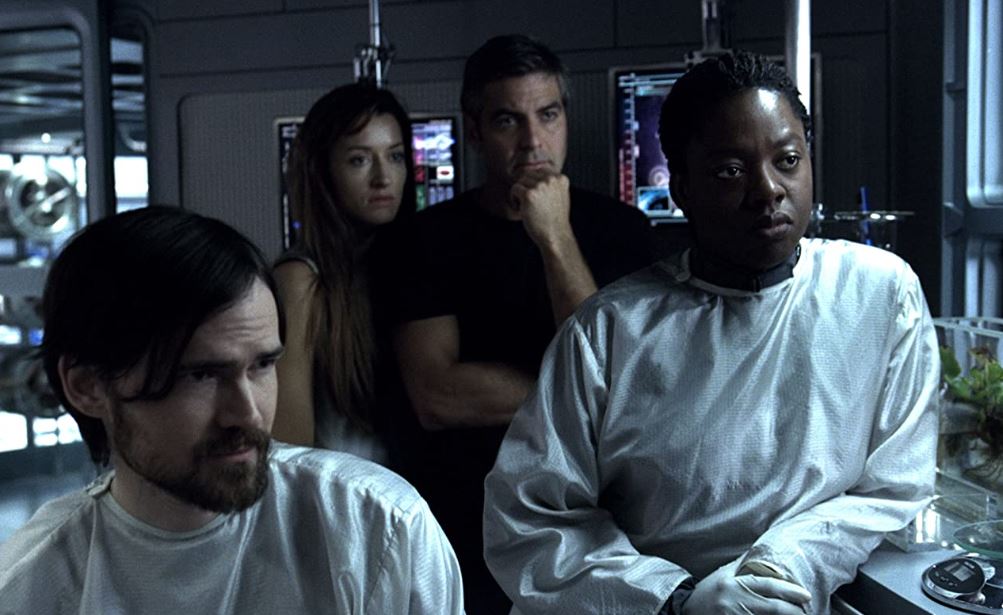 And given his perception of the relationship is tainted by tragedy, does this mean that if he and this version of Rheya did start a romantic relationship, it would inevitably also end badly?

And also, why is Solaris manifesting these loved ones? And do the loved ones that reappear have an ulterior, nefarious motive?

Clooney does some of his best-ever work playing the haunted, rational Chris who at first responds with terror to seeing his dead wife alive again before gradually coming to see the strange phenomena as a second chance for the pair.

McElhone - who was recently back on screens in The Crown season five - is wonderful too, essentially playing two different characters - the Rheya that Chris knew on Earth and the one who shows up on the space station that begins to question her very existence.

Also among the main cast is the excellent Jeremy Davies as Snow, who first appears to be just comic relief - at one point, he muses about the visitors: "I wonder if they can get pregnant". However, there is more than meets the eye with the character.

Viola Davis is also her typically commanding self in one of her earliest major roles, going toe-to-toe with Clooney's character as Dr Gordon - who believes Rheya and the other visitors should be terminated.

At the same, virtually every shot in the film is beautifully composed and cut by Soderbergh (on top of writing and directing the movie, he edited and served as cinematographer on it under a pseudonym).

Blue is often the dominant colour in scenes - enhancing the feeling of sorrow, along with composer Cliff Martinez's swoony melancholic electro-tinged score.

Even with all these great qualities, however, Solaris was released in the aftermath of a string of more traditional blockbuster sci-fi films like Alien: Resurrection, Armageddon, Deep Impact, Independence Day, The Fifth Element and Starship Troopers.

And given the fact that Solaris purposely avoids car chases, gun fights and killer aliens in favour of a "journey into the subconscious", Soderbergh has conceded it was always going to be a tough sell to viewers.

To try to entice viewers into seeing it, its trailers were cut to make it appear more action-packed.

As such, it's likely the marketing of Solaris as a more straightforward genre movie is what led to a lot of annoyed audience members and bad buzz after it premiered.

In the aforementioned DVD commentary, Cameron and Soderbergh reflected on this, sharing the following exchange.

James Cameron: I think people weren’t expecting the film to be as emotional and spare in all other ways, other than that, other than the relationship [between Chris and Rheya].

Steven Soderbergh: For a lot of people, that was a difficult thing to get past because it is so lean in that regard… Running against the grain. I think, in retrospect, people needed more preparation for that.

The fact that the film wasn’t finished until very, very close to the release date meant that maybe we should have pushed, maybe we should have had more time to screen the film and come up with a campaign that gave people a sense of the experience that they were about to have because it was a difficult movie to encapsulate in a poster or a trailer or a TV spot.

James Cameron: We’d look at posters and say: ‘That gets part of it but it doesn’t get the essence of it.'

Steven Soderbergh: No, I don’t think we ever quite solved it.

However, 20 years after its release and now unburdened by expectations, Solaris is waiting to be rediscovered as a beautiful and haunting sci-fi gem by those who may have panned it in 2002.

popular
Conor Mcgregor hit by car ‘at full speed’ while cycling
New Netflix series deserves to be as big as Stranger Things
The JOE Friday Pub Quiz: Week 331
Couple left mortified after best man delivers incredible punchline during speech
Peaky Blinders creator on the lookout for 'skinheads' for new drama
All of the new Netflix movies and shows arriving in February
DJ accidentally shoots herself in the face with a confetti cannon while performing
You may also like
1 day ago
Barry Keoghan mentioned in UK Parliament speech during government debate
1 day ago
BBC apologises after calling Paul Mescal 'British' in Oscar coverage
1 day ago
Netflix defends Squid Game reality show as three people receive medical treatment
2 days ago
A very funny horror comedy is among the movies on TV tonight
2 days ago
Here's the line-up for this week's Late Late Show, which will include an Irish Oscars tribute
3 days ago
Britain's Got Talent confirms David Walliams' replacement
Next Page