Neeson as a Force ghost? Star Wars fans would love to see that!

There has been a disturbance in the Force because with all eyes turned towards Solo: A Star Wars Story, it's easy to forget that there's another Star Wars spin-off in the works and the answer is yes, these are the droids you're looking for.

As reported previously, Stephen Daldry is set to helm a Star Wars movie about Obi-Wan Kenobi, the iconic Jedi Master who was portrayed by Sir Alec Guinness in the original trilogy and then Ewan McGregor in the prequels. Belfast has already been tipped as a filming location and pre-production on the standalone Kenobi film is gathering pace.

END_OF_DOCUMENT_TOKEN_TO_BE_REPLACED

As of yet, no official casting has been announced but Ewan McGregor has frequently said that he's more than interested in reprising the role.

In a recent interview with The Hollywood Reporter, he said: "There’s a lot of talk and I’d be happy to play him (Obi-Wan) again but I don’t know anything more than you do.”

In another interview with EW, McGregor said that he's also got unfinished business with the role.

“There’s no official offer, and I haven’t met them about it or anything. But I’ve always said that I’d be happy to do it if they wanted to do it. It would be a good segue between the last episode of the prequels and the new episodes. I think they’ve got films to make until the 2020s, so I don’t think it’s going to happen soon if it happens at all," he said.

END_OF_DOCUMENT_TOKEN_TO_BE_REPLACED

Well, one man that might have an inside track is Joel Edgerton because the talented actor played Owen Lars in the prequel trilogy and while promoting his new film, Red Sparrow, Edgerton told Yahoo that he's "totally down" to reprise the role.

"First part of your question is: could he come back? Yes. Should he come back? Maybe even more of a yeah! I think me and Ewan and Liam Neeson in a movie is pretty good. Absolutely! I’d be totally down," he said.

Ok, we all know that Qui-Gon Jinn (Neeson) died after meeting the pointy end of Darth Maul's lightsaber, but he could come back as a force ghost - just like so many Jedi mentors.

In fact, while promoting his latest film, The Commuter, Neeson was very cryptic when asked about the possibility of returning to Star Wars. 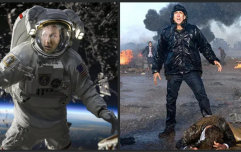 END_OF_DOCUMENT_TOKEN_TO_BE_REPLACED

"This is the first time I'm hearing of this," the Irish actor said to Yahoo. No-one's been in touch with me. I know in the Star Wars world anything is possible. In the first one, The Phantom Menace, I died but we know, you know, Jedis come back and stuff but no-one's been in touch. We'll see," he said.

Regarding the character of Owen Lars- Luke Skywalker's 'uncle' - Edgerton has previously given a few insights into how he sees Lars' potential role in any upcoming Obi-Wan film.

In an interview with Business Insider, he said: "I like the idea that Uncle Owen is one of those guys who has done some super cool shit but has just never bragged about it. My idea is that he could go out and have some adventure and then he comes back and slips back into that unassuming moisture farmer role. Everyone talks about Obi-Wan being super cool, Owen secretly knows that he was there, and he did some of the cool shit, too."

An Obi-Wan film with a badass Owen Lars and an appearance from Qui-Gon Jinn? The Force would be strong with that!

popular
Netflix has just added an incredibly tense 97-minute thriller
Eamon Ryan's mother dies in tragic accident on family holiday
Forget about ultra cheap Ryanair flights for the foreseeable future, says O'Leary
Prime Video has just added 25 very big movies to its library
Stunning Mayo beach named the best place to swim in Ireland and the UK
The Ultimate "That Actor From That Thing" Quiz
WATCH: House of Hammer details the alleged crimes of award-winning actor Armie Hammer
You may also like
1 day ago
5 must-watch shows and movies streaming on NOW in August
3 days ago
Two long-thought-dead Marvel projects appear to be in the works
3 days ago
Nope has the best scary scene in 2022 so far
5 days ago
This new true-life disaster show is being called one of the grimmest, bleakest shows ever made
6 days ago
All the new releases coming to Netflix, Prime Video, Disney+ and cinemas in August
6 days ago
WATCH: The trailer for The Banshees Of Inisherin has arrived
Next Page