#TRAILERCHEST: Depp is deep in it again for Pirates Of The Caribbean: Dead Men Tell No Tales

You had us at ghost sharks!

Welcome to #TrailerChest, where we're taking a sneak peek at the brand new trailer for Pirates Of The Caribbean: Dead Men Tell No Tales. 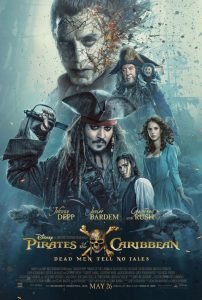 END_OF_DOCUMENT_TOKEN_TO_BE_REPLACED

With an old nemesis out for revenge against him and every single other pirate in existence, Jack Sparrow finds himself in deep water again, and perhaps the only way to save himself and his fellow pirating men and women is to find the infamous trident of Poseidon.

The self-declared final adventure sees Depp reuniting with Orlando Bloom and Geoffrey Rush, while Skyfall villain Bardem is on bad guy duties, and we've been promised a masssive at-sea battle featuring not one, not two, but over a DOZEN ships all firing at each other. Sounds epic!