The jury is still very much out on Ed’s version.

Sometimes, no matter who you are, you just don’t mess with a classic.

It is a lesson that Ed Sheeran has learned the hard way of late after his decision to cover ‘Fairytale of New York’ by The Pogues, arguably the Daddy of the many, many Christmas songs recorded over the years. 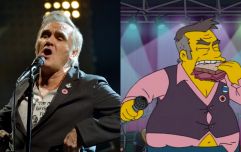 END_OF_DOCUMENT_TOKEN_TO_BE_REPLACED

Ed’s initial version of the song met with a lukewarm reaction at best, but it didn’t stop him performing it on the Late Late Show with some high-profile friends on Friday night.

Sheeran was joined by Lisa Hannigan, Picture This and Beoga, with whom he recorded ‘Galway Girl’ on his most recent album, Divide, on a night where he performed three songs and sat down with Ryan Tubridy for a chat which included a discussion about his social habits.

You can’t really argue with the talent of the people performing the song here, but covers like this are always going to cause division when the original is so known and loved in the first place.

Judge for yourself whether or not they pulled it off by having a listen below.

popular
The 50 most iconic songs of all time* have been revealed
Sons of Anarchy creator confirms plans for 2 more shows based around Jax's family
PICS: The man with the biggest penis in the world has one unbelievable problem with it
Paul Murphy says there will be 2014-style mass protests if the Government re-introduce water charges
"I don't want to be Tom Holland!" - Dave Bautista on the difficulty of keeping big Marvel secrets
People think they've figured out the ranking of the viewers on your Instagram Stories
Seth Rogen shocks fans after shaving beard off
You may also like
19 hours ago
NBC refuses to air 2022 Golden Globes over lack of diversity within Hollywood Foreign Press Association
5 days ago
New RTÉ series to celebrate The Commitments, The Snapper and The Van 30 years on
1 week ago
QUIZ: How well do you know Ted Hastings' one-liners from Line of Duty?
1 week ago
Line of Duty's Martin Compston says Sunday's episode could be the last ever
1 week ago
Each Line of Duty copper ranked by their likelihood of being H
2 weeks ago
Netflix’s new true crime documentary could be your next TV obsession
Next Page