George Ezra is a cheery fellow.

So upbeat is he, that not only did Ezra put smiles on faces at Electric Picnic over the weekend as torrential rain flowed down, he remained composed when Chic legend Nile Rodgers gatecrashed his JOE interview - check that out on our IGTV on Instagram, by the way. 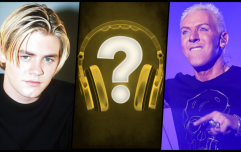 END_OF_DOCUMENT_TOKEN_TO_BE_REPLACED

With all that in mind, we'd expect he'd get a kick out of Jack Ó Conghaile's 'as Gaeilge' take on his monster hit 'Shotgun'.

The TG Lurgan crew have form for this kind of thing, having taken on the likes of Maroon 5, 5 Seconds of Summer and Justin Timberlake in recent months.

Their project was born in Coláiste Lurgan, who previously gave rise to Gaeltacht superstars Seo Linn.

And it turns out that Ezra's folk-pop fits in neatly on the below take, if you're into that kind of thing...